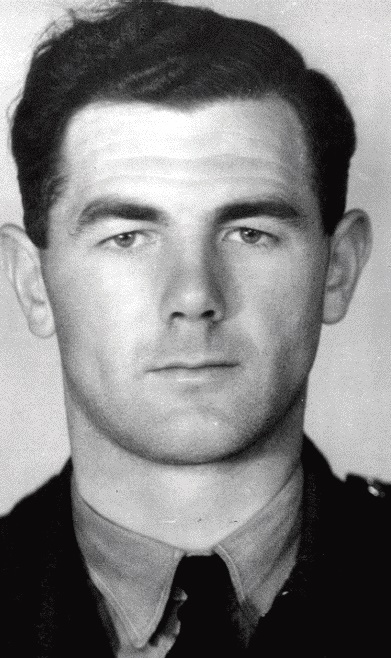 The Dortmund-Ems Canal connects Dortmund in the Ruhr with the North Sea at Emden by means of the River Ems. Because of its strategic importance it was attacked many times by the RAF.

This airman was the wireless operator in a Lancaster aircraft which attacked the Dortmund- Ems Canal in daylight on the 1st January, 1945. The bombs had just been released when a heavy shell hit the aircraft in front of the midupper turret. Fire broke out and dense smoke filled the fuselage. The nose of the aircraft was then hit and an inrush of air, clearing the smoke, revealed a scene of utter devastation. Most of the perspex screen of the nose compartment had been shot away, gaping holes had been torn in the canopy above the pilot’s head, the inter-communication wiring was severed, and there was a large hole in the floor of the aircraft. Bedding and other equipment were badly damaged or alight; one engine was on fire. Flight Sergeant Thompson saw that the gunner was unconscious in the blazing mid-upper turret. Without hesitation he went down the fuselage into the fire and the exploding ammunition. He pulled the gunner from his turret and, edging his way round the hole in the floor, carried him away from the flames. With his bare hands, he extinguished the gunner’s burning clothing. He himself sustained serious burns on his face, hands and legs. Flight Sergeant Thompson then noticed that the rear gun turret was also on fire. Despite his own severe injuries he moved painfully to the rear of the fuselage where he found the rear gunner with his clothing alight, overcome by flames and fumes. A second time Flight Sergeant Thompson braved the flames. With great difficulty he extricated the helpless gunner and carried him clear. Again, he used his bare hands, already burnt, to beat out flames on a comrade’s clothing. Flight Sergeant Thompson, by now almost exhausted, felt that his duty was not yet done. He must report the fate of the crew to the captain. He made a perilous journey back through the burning fuselage, clinging to the sides with his burnt hands to get across the hole in the floor. The flow of cold air caused him intense pain and frost-bite developed. So pitiful was his condition that his captain failed to recognise him. Still, his only concern was for the two gunners he had left in the rear of the aircraft. He was given such attention as was possible until a crashlanding was made some 40 minutes later. When the aircraft was hit, Flight Sergeant Thompson might have devoted his efforts to quelling the fire and so have contributed to his own safety. He preferred to go through the fire to succour his comrades. He knew that he would then be in no position to hear or heed any order which might be given to abandon aircraft. He hazarded his own life in order to save the lives of others. Young in years and experience, his actions were those of a veteran. Three weeks later Flight Sergeant Thompson died of his injuries. One of the gunners unfortunately also died, but the other owes his life to the superb gallantry of Flight Sergeant Thompson, whose signal courage and self-sacrifice will ever be an inspiration to the Service.