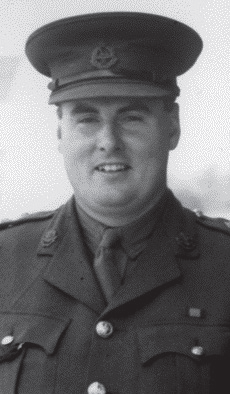 On 26 May 1940 German troops captured Calais while the following day Belgium surrendered. All British forces in the area had retreated towards Dunkirk and the coast running to the east, and the evacuation of British and Allied troops began. The operation was completed by 4 June. As it progressed there was a desperate struggle to keep the advancing Germans at bay. On 31 May 1st Battalion The East Lancashire Regiment, were north of Warhem, holding a section of the Canal de Bergues, which ran parallel to the coast about five miles inland from it. On the morning of 1 June the Germans succeeded in crossing this and by that evening the East Lancashires had withdrawn behind the Canal des Chats between Téteghem and Uxem about three miles from the coast.

For most conspicuous gallantry on active service on the night of the 31st May/1st June, 1940. Captain Ervine-Andrews took over about a thousand yards of the defences in front of Dunkirk, his line extending along the Canal de Bergues, and the enemy attacked at dawn. For over ten hours, notwithstanding intense artillery, mortar, and machine-gun fire, and in the face of vastly superior enemy forces, Captain Ervine-Andrews and his company held their position. The enemy, however, succeeded in crossing the canal on both flanks; and, owing to superior enemy forces, a company of Captain Ervine-Andrews’ own battalion, which was despatched to protect his flanks, was unable to gain contact with him. There being danger of one of his platoons being driven in, he called for volunteers to fill the gap, and then, going forward, climbed on to the top of a straw-roofed barn, from which he engaged the enemy with rifle and light automatic fire, though, at the time, the enemy were sending mortar-bombs and armourpiercing bullets through the roof. Captain Ervine-Andrews personally accounted for seventeen of the enemy with his rifle, and for many more with a Bren gun. Later, when the house which he held had been shattered by enemy fire and set alight, and all his ammunition had been expended, he sent back his wounded in the remaining carrier. Captain Ervine-Andrews then collected the remaining eight men of his company from this forward position, and, when almost completely surrounded, led them back to the cover afforded by the company in the rear, swimming or wading up to the chin in water for over a mile; having brought all that remained of his company safely back, he once again took up position. Throughout this action, Captain Ervine-Andrews displayed courage, tenacity, and devotion to duty, worthy of the highest traditions of the British Army, and his magnificent example imbued his own troops with the dauntless fighting spirit which he himself displayed.