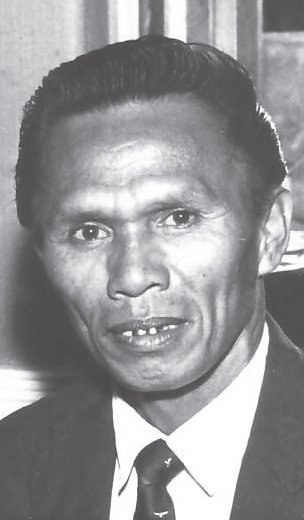 The Malayan Emergency, an armed revolt by the Malayan People’s Liberation Army, the armed wing of the Malayan Communist Party, had broken out in 1948 and did not formally end until 1960. It drew its support mainly from amongst the local Chinese population. The rebel bases were in the jungle and Iban trackers were brought over from Sarawak to help locate them. On 26 May 1951 a camp of the Worcesters at Ulu Paloh estate, north-west of Kulang in Johor state, was fired on by rebels. Patrols were then sent out to try and locate them.

The KING has been graciously pleased to make the undermentioned awards:- GEORGE CROSS. Awang anak Rawang, Iban Tracker, Johore, Federation of Malaya. During operations against the bandits in Malaya a section of a platoon of the Worcestershire Regiment was ambushed by about 50 of the enemy. The leading scout was killed instantly and the Section Commander fatally wounded. Awang anak Rawang was hit through the thigh bone and at the same time a soldier, moving behind him, was hit below the knee, the bullet completely shattering the bone. Awang anak Rawang, although wounded and lying exposed under heavy rifle and automatic fire, collected his own weapons and that of the soldier and dragged him into the cover of the jungle. In view of the impending attack Awang, completely disregarding his own wound, took up a position to defend the injured man. There he remained, firing on every attempt made by the bandits to approach, and successfully drove off several attacks. Ultimately Awang was again wounded, the bullet shattering his right arm and rendering further use of his rifle or parang impossible. Despite loss of blood from his undressed wounds, he dragged himself over to the wounded soldier and took a grenade from the man’s pouch. He resumed his position on guard, pulled out the pin of the grenade with his teeth and with the missile in his left hand defied the bandits to approach. So resolute was his demeanour that the bandits, who had maintained their attacks for some forty minutes, and who were now threatened by other sections, withdrew. The coolness, fortitude and offensive spirit displayed by Awang anak Rawang were of the highest order. Despite being twice severely wounded he showed the utmost courage and resolution to continue the fight and protect the injured soldier.