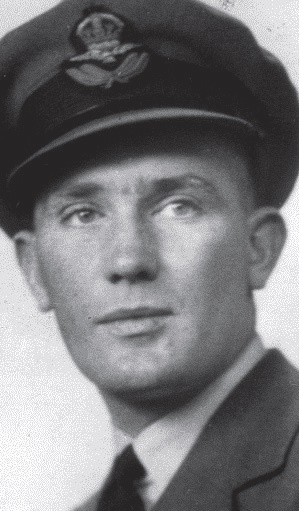 On 23 December 1944 thirty Lancasters mounted a daylight raid on the railway marshalling yards at Gremberg, Cologne, on the east bank of the Rhine. Apart from Squadron Leader R A M Palmer, another participant in the raid was Captain E Swales VC. Palmer was using the Oboe radio-guided blind-bombing system, which sent radio signals to the aircraft indicating precisely when the bombs should be dropped. Unfortunately it also required the pilot to fly a ‘steady approach’ course to the target, a most difficult task when confronted by relentless anti-aircraft fire.

This officer has completed 110 bombing missions. Most of them involved deep penetration of heavily defended territory; many were low-level “marking” operations against vital targets; all were executed with tenacity, high courage and great accuracy. He first went on operations in January, 1941. He took part in the first 1,000 bomber raid against Cologne in 1942. He was one of the first pilots to drop a 4,000 lb. bomb on the Reich. It was known that he could be relied on to press home his attack whatever the opposition and he bombed with great accuracy. He was always selected, therefore, to take part in special operations against vital targets. The finest example of his courage and determination was on the 23rd December, 1944, when he led a formation of Lancasters to attack the marshalling yards at Cologne in daylight. He had the task of marking the target and his formation had been ordered to bomb as soon as the bombs had gone from his, the leading aircraft. The leader’s duties during the final bombing run were exacting and demanded coolness and resolution. To achieve accuracy he would have to fly at an exact height and air speed on a set course regardless of opposition. Some minutes before the target was reached, his aircraft came under heavy anti-aircraft fire, shells burst all around, two engines were set on fire and there were flames and smoke in the nose and in the bomb bay. Enemy fighters now attacked in force. Squadron Leader Palmer disdained the possibility of taking avoiding action. He knew that if he diverged the least bit from his course, he would be unable to utilise the special equipment to the best advantage. He was determined to complete the run and provide an accurate and easily seen aiming-point for the other bombers. He ignored the double risk of fire and explosion in his aircraft and kept on. With its engines developing unequal power, an immense effort was needed to keep the damaged aircraft on a straight course. Nevertheless, he made a perfect approach and his bombs hit the target. His aircraft was last seen spiralling to earth in flames. Such was the strength of the opposition that more than half of his formation failed to return. Squadron Leader Palmer was an outstanding pilot. He displayed conspicuous bravery. His record of prolonged and heroic endeavour is beyond praise.