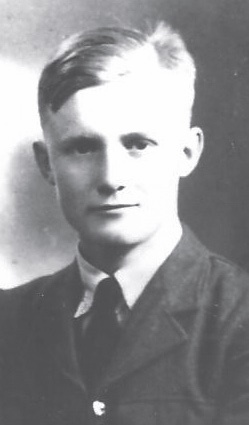 After the loss of Central Italy, the Germans had withdrawn to the Gothic (or Green) Line. In the east this reached the Adriatic coast at Pesaro. The British 8th Army launched its attack on the eastern section of the line on 25 August 1944. The Germans resisted strongly and did not evacuate Rimini until 21 September. By late December the Allies had captured Ravenna and reached Porto Corsini on the coast, south of Lake Comacchio. They still had to advance into Lombardy-Venetia. After rescuing Mussolini from imprisonment the Germans had installed him as leader of the Italian Social Republic (the Salo Republic). With his Fascist Party, he was in nominal charge of all territory under German control. Ariano nel Polesine, where Sergeant A Banks was imprisoned, is south of the main channel of the Po, just west of the delta where the river flows into the Adriatic.

On 29th August, 1944, this airman took part in an armed reconnaissance of the Ravenna and Ferrara areas. During the sortie, his aircraft was damaged by anti-aircraft fire and he was compelled to make a forced landing. After the aircraft had been destroyed, Sergeant Banks decided to try to reach the Allied lines. He made contact with a group of Italian partizans, amongst whom, during the following months, he became an outstanding figure, advising and encouraging them in action against the enemy. Early in December, 1944, an attempt at crossing into allied territory by boat was planned. Sergeant Banks and a number of partizans assembled at the allotted place, but the whole party was surrounded and captured. Sergeant Banks was handed over to the German commander of the district, who presided at his interrogation. During the questioning, Sergeant Banks was cruelly tortured. At one stage, he succeeded in getting hold of a light machine gun, with which he might have killed most of his captors, had not one of the partizans, fearing more severe torture, intervened and pinned his arms to his sides. Sergeant Banks was badly knocked about before he was taken to another prison. On 8th December, 1944, Sergeant Banks was taken, with a number of partizans, to a prison at Adria. He remained there until 19th December, 1944, when he was handed over to the commander of a detachment of the “Black Brigade”. He was then transferred to another prison at Ariano Polesine. Here, in the presence of Italian Fascists, he was stripped of his clothing and again tortured. Sergeant Banks was eventually bound and thrown into the River Po. Despite his wounds, even at this stage, he succeeded in reaching the river bank. The Fascists then took him back to the prison, where he was shot through the head. At the time of his capture, Sergeant Banks was endeavouring to return to the Allied lines, so that he might arrange for further supplies to the partizans. He endured much suffering with stoicism, withholding information which would have been of vital interest to the enemy. His courage and endurance were such that they impressed even his captors. Sergeant Banks’ conduct was, at all times, in keeping with the highest traditions of the Service, even in the face of most brutal and inhuman treatment.