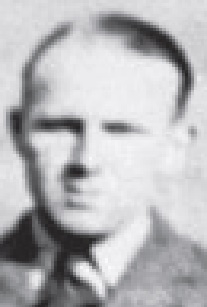 RAF Ein Shemer was about six miles south-east of the biblical town of Caesarea and was a major air base. The main role of the RAF squadrons stationed there was air surveillance of the Palestinian coast for signs of illegal immigrants.

On the night of 28th March, 1947, during refuelling operations on a Lancaster aircraft of No. 38 Squadron, a violent fire broke out suddenly in the pumping compartment of the refuelling vehicle of which Sergeant Beckett was the driver. The flames enveloped Sergeant Beckett and set alight the front of the Lancaster’s fuselage. Another airman beat out the flames on Sergeant Beckett but not before the latter had sustained very severe burns on the hands and face. At this moment, there was grave danger that the main tank of the refuelling vehicle, containing over two thousand gallons of fuel, would explode, in which case it was practically certain that most, if not all, of the twenty or more aircraft in the park would have been destroyed. In spite of his serious injuries and the pain he was suffering, Sergeant Beckett got into the driver’s seat of the blazing vehicle and drove it a distance of about four hundred yards to a point outside the aircraft park, where it could do no further damage. After this he collapsed and was taken in the ambulance to the Station Sick Quarters dangerously ill. He died on 12th April, 1947. The fires in the Lancaster aircraft and in the vehicle were eventually brought under control, and extinguished with no further damage to persons or property. There is no doubt that, by his prompt and gallant action, Sergeant Beckett saved a number of valuable aircraft from almost certain destruction and his comrades, who were working in the vicinity, from risk of serious injury.