Born on the 18th of June 1983, Dan Keighran was just 17 when he left his home town of Lowmead in Queensland to enlist in the Australian Army. Serving in the 6th Battalion Royal Australian Regiment in Brisbane, Queensland for nearly 11 years, Dan discharged from full-time service and relocated with his wife Kathryn to Kalgoorlie in Western Australia to commence employment in the mining sector. After 3 years they relocated back to Brisbane where professionally Dan now works as a consultant with the Seven Network and as a Brand Ambassador for Australian Defence Apparel (ADA), consulting on military apparel and load carriage in the research, development and innovations team. Dan has continued to serve his country as an Active Reservist with the Australian Army and donates his time as an Ambassador to Mates4Mates, supporting current and ex-serving Australian Defence Force members (and their families) who have physical or psychological wounds, injuries or illnesses as a result of their service. 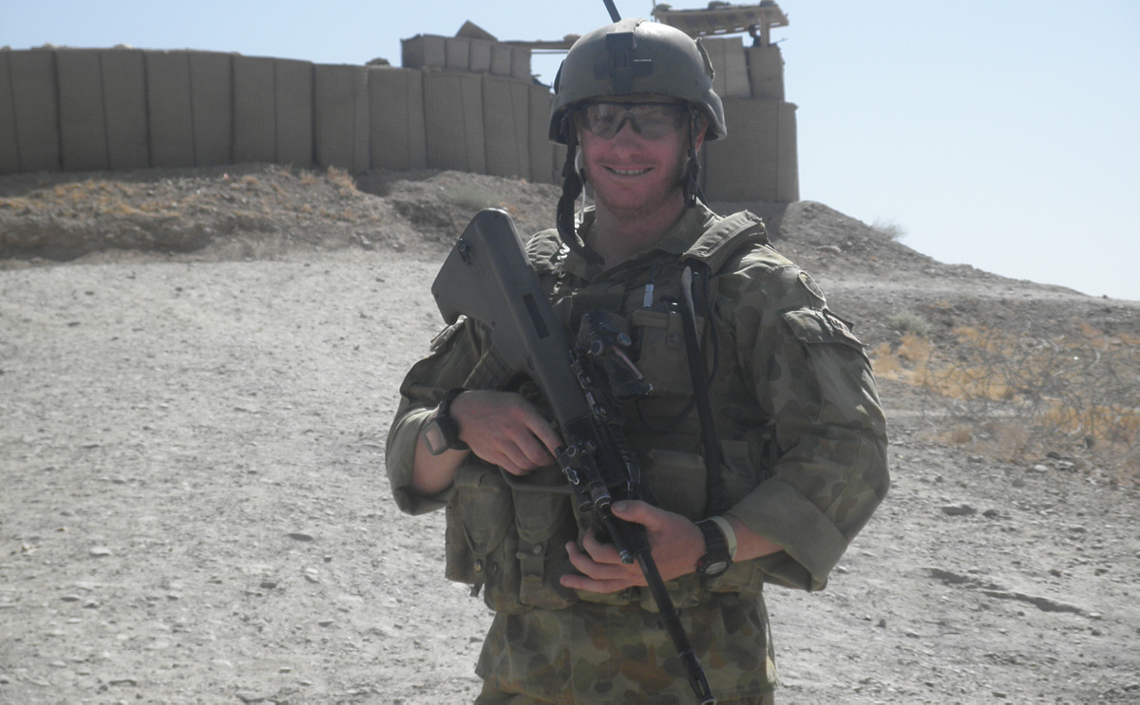 For the most conspicuous acts of gallantry and extreme devotion to duty in action in circumstances of great peril at Derapet, Uruzgan province, Afghanistan, as part of the Mentoring Task Force One on Operation SLIPPER.

Corporal Keighran deployed to Afghanistan in February 2010 with the 6th Battalion, Royal Australian Regiment. On 24 August 2010, Corporal Keighran was a member of a partnered fighting patrol with soldiers of the Afghan National Army’s 1st Kandak, 4th Brigade, 205th (Hero) Corps, which was engaged by a numerically superior and coordinated enemy attack from multiple firing points in three separate locations. The attack was initiated by a high volume of sustained and accurate machine-gun and small-arms fire which pinned down the combined Australian and Afghan patrol and caused a loss of momentum.

In the early stages of the attack, and upon realising that the forward elements of the patrol needed effective fire support, Corporal Keighran and another patrol member moved under sustained and accurate enemy fire to an exposed ridgeline to identify enemy locations and direct the return fire of both Australian and Afghan machine guns. On reaching this position and with complete disregard for his own wellbeing, Corporal Keighran deliberately drew enemy fire by leaving the limited cover he had and moved over the ridgeline in order to positively identify targets for the machine gunners of the combined patrol. After identifying some of the enemy firing positions, Corporal Keighran, under persistent enemy fire continued to lead and mentor his team and move around the ridge to both direct the fire of the Afghan and Australian machine gunners and to move them to more effective firing positions.

As the intensity of enemy fire grew, Corporal Keighran returned to the crest of the ridgeline to identify targets and adjust the fire of Australian Light Armoured Vehicles. His actions resulted in the effective suppression of enemy firing points, which assisted in turning the fight in the favour of the combined patrol. Moving to a new position, Corporal Keighran deliberately and repeatedly again exposed himself to heavy enemy fire to assist in target identification and the marking of the forward line of troops for fire support elements whilst simultaneously engaging the enemy. Realising that the new position provided a better location for the patrol’s joint fire controller, Corporal Keighran moved over 100 metres across exposed parts of the ridgeline, attracting a high volume of accurate enemy fire, to locate and move the fire controller to the new position. He then rose from cover again to expose his position on four successive occasions, each movement drawing more intense fire than the last in order to assist in the identification of a further three enemy firing points that were subsequently engaged by fire support elements. During one of these occasions, when his patrol sustained an Australian casualty, Corporal Keighran with complete disregard for his own safety, left his position of cover on the ridgeline to deliberately draw fire away from the team treating the casualty. Corporal Keighran remained exposed and under heavy fire while traversing the ridgeline, in order to direct suppressing fire and then assist in the clearance of the landing zone to enable evacuation of the casualty.

Corporal Keighran’s acts of the most conspicuous gallantry to repeatedly exposed himself to accurate and intense enemy fire, thereby placing himself in grave danger, ultimately enabled the identification and suppression of enemy firing positions by both Australian and Afghan fire support elements. These deliberate acts of exceptional courage in circumstances of great peril were instrumental in permitting the withdrawal of the combined Australian and Afghan patrol with no further casualties. His valour is in keeping with the finest traditions of the Australian Army and the Australian Defence Force.

CPL Keighran is the third recipient of the Victoria Cross for Australia which was awarded to him on the 1st of November 2012.