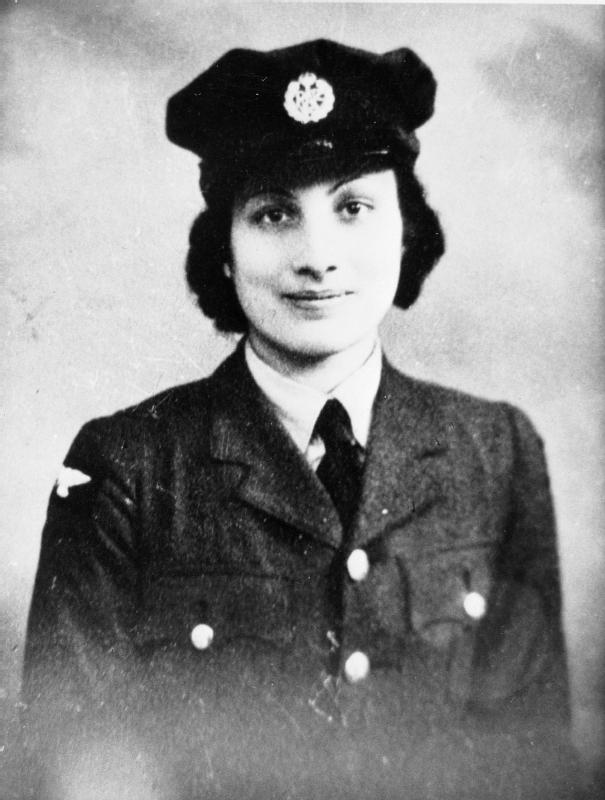 Noor-un-Nisa Inayat Khan, code-named ‘Madeleine’, was the first woman wireless operator to be sent to occupied France by SOE. She was determined to continue with the mission though the group run by Captain F A Suttill, ‘Agent Prosper’, to which she had been assigned, had already largely been rounded up by the Germans. The situation was so dangerous that SOE intended her to be one of the agents who were evacuated on 15 August 1943, but she insisted on remaining. On or about 13 October 1943, she was betrayed to the Germans, who also secured her wireless set and code books. These they were able to use against SOE, which believed she was still transmitting. Inayat Khan made several attempts to escape. In November 1943 she was sent to Pforzheim Prison, south-east of Karlsruhe in Germany, for ‘safe custody’ and in September 1944 to Dachau concentration camp where on 13 September she was executed.

The KING has been graciously pleased to approve the posthumous award of the GEORGE CROSS to:— Assistant Section Officer Nora Inayat-Khan (9901), Women’s Auxiliary Air Force. Assistant Section Officer Nora Inayat-Khan was the first woman operator to be infiltrated into enemy occupied France, and was landed by Lysander aircraft on 16th June, 1943. During the weeks immediately following her arrival, the Gestapo made mass arrests in the Paris Resistance groups to which she had been detailed. She refused however to abandon what had become the principal and most dangerous post in France, although given the opportunity to return to England, because she did not wish to leave her French comrades without communications and she hoped also to rebuild her group. She remained at her post therefore and did the excellent work which earned her a posthumous Mention in Dispatches. The Gestapo had a full description of her, but knew only her code name “Madeleine”. They deployed considerable forces in their effort to catch her and so break the last remaining link with London. After 3½ months she was betrayed to the Gestapo and taken to their H.Q. in the Avenue Foch. The Gestapo had found her codes and messages and were now in a position to work back to London. They asked her to co-operate, but she refused and gave them no information of any kind. She was imprisoned in one of the cells on the 5th floor of the Gestapo H.Q. and remained there for several weeks during which time she made two unsuccessful attempts at escape. She was asked to sign a declaration that she would make no further attempts but she refused and the Chief of the Gestapo obtained permission from Berlin to send her to Germany for “safe custody”. She was the first agent to be sent to Germany. Assistant Section Officer Inayat-Khan was sent to Karlsruhe in November, 1943, and then to Pforsheim where her cell was apart from the main prison. She was considered to be a particularly dangerous and unco-operative prisoner. The Director of the prison has also been interrogated and has confirmed that Assistant Section Officer Inayat-Khan, when interrogated by the Karlsruhe Gestapo, refused to give any information whatsoever, either as to her work or her colleagues. She was taken with three others to Dachau Camp on the 12th September, 1944. On arrival, she was taken to the crematorium and shot. Assistant Section Officer Inayat-Khan displayed the most conspicuous courage, both moral and physical over a period of more than 12 months.