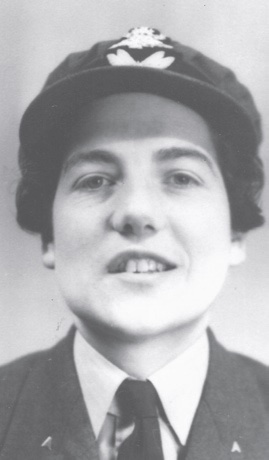 Corporal J D M Pearson was awarded the EGM for her gallantry on 31 May 1940 in rescuing the pilot from the burning wreckage of a crashed aircraft at RAF Detling, three miles northeast of Maidstone. She returned to the aircraft to try and rescue another member of the crew but he was already dead.

The KING has been graciously pleased to approve the following Awards:– The Medal of the Military Division of the Most Excellent Order of the British Empire, for Gallantry:– 880538 Corporal (now Assistant Section Officer) Joan Daphne Mary Pearson, Women’s Auxiliary Air Force. On the 31st May, 1940, at 0100 hours an aircraft crashed near the Women’s Auxiliary Air Force quarters, the pilot being seriously injured, another officer killed outright and two airmen slightly injured. Upon hearing the crash Corporal Pearson rushed out to it and, although the aircraft was burning and she knew there were bombs aboard, she stood on the wreckage, roused the pilot, who was stunned, and assisted him in getting clear, releasing his parachute harness in doing so. When he was on the ground about 30 yards away, a 120 lb. bomb went off. Corporal Pearson at once threw herself on top of the pilot to protect him from blast and splinters. Her prompt and courageous action undoubtedly helped to save the pilot’s life.