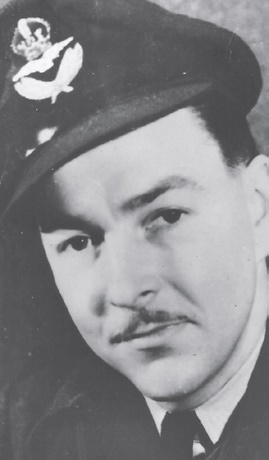 On 26 August 1944, a Wellington bomber took off from RAF Chivenor, north of the Taw estuary, west of Barnstaple, Devon on an anti-submarine patrol. It was shot down in the North Atlantic by U534.

The KING has been graciously pleased to approve the posthumous award of the GEORGE CROSS to:— Flying Officer Roderick Borden Gray (Can/J.13979), Royal Canadian Air Force. One night in August, 1944, this officer was the navigator of a Wellington aircraft which was shot down into the sea by a U-boat in the Atlantic. Flying Officer Gray and 3 other members of the crew managed to extricate themselves from the aircraft. Despite a severe wound in the leg, Flying Officer Gray succeeded in inflating his own dinghy and then assisted his captain, who had also been wounded, into it. Shortly afterwards cries were heard from another member of the crew, who had broken his arm, and Flying Officer Gray also helped him into the dinghy. Knowing that it could not hold more than 2 persons, Flying Officer Gray, although suffering intense pain, refused to get into the dinghy. Assisted by another member of the crew and by an occupant of the dinghy he held on to its side for some hours. The pain from his leg (it is thought that the lower part had been shot off) was increasing in intensity and he was becoming exhausted. He steadfastly refused however, to endanger his comrades by entering the dinghy. He eventually lost consciousness and died. When it became light, his companions realised that he was dead and they were forced to let his body sink. The survivors were rescued later. Flying Officer Gray displayed magnificent courage and unselfish heroism, thus enabling the lives of his comrades to be saved.