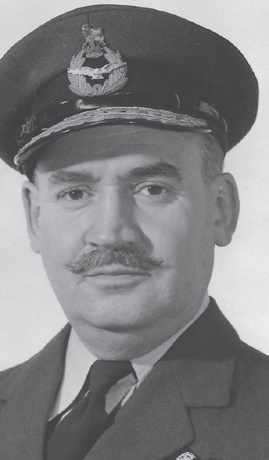 RAF Tholthorpe was situated between York and Ripon. Early in the morning of 28 June 1944 a RCAF Halifax bomber, piloted by Sergeant M J Lavoie, returning there on three engines, crashed into a parked Halifax loaded with bombs.

The KING has been graciously pleased to approve the following awards of the GEORGE CROSS, the George Medal and the British Empire Medal (Military Division) to the undermentioned:— Awarded The GEORGE CROSS. Air Commodore Arthur Dwight Ross, O.B.E., Royal Canadian Air Force. One night in June, 1944, an aircraft, while attempting to land, crashed into another which was parked in the dispersal area and fully loaded with bombs. The former aircraft had broken into 3 parts and was burning furiously. Air Commodore Ross was at the airfield to attend the return of aircraft from operations and the interrogation of aircrews. Flight Sergeant St. Germain a bomb aimer, had just returned from an operational sortie and Corporal Marquet was in charge of the night ground crew, whilst leading Aircraftmen McKenzie and Wolfe were members of the crew of the crash tender. Air Commodore Ross with the assistance of Corporal Marquet, extricated the pilot who had sustained severe injuries. At that moment ten 500 lb. bombs in the second aircraft, about 80 yards away, exploded, and this officer and airman were hurled to the ground. When the hail of debris had subsided, cries were heard from the rear turret of the crashed aircraft. Despite further explosions from bombs and petrol tanks which might have occurred, Air Commodore Ross and Corporal Marquet returned to the blazing wreckage and endeavoured in vain to swing the turret to release the rear gunner. Although the port tail plane was blazing furiously, Air Commodore Ross hacked at the perspex with an axe and then handed the axe through the turret to the rear gunner who enlarged the aperture. Taking the axe again the Air Commodore, assisted now by Flight Sergeant St. Germain as well as by Corporal Marquet, finally broke the perspex steel frame supports and extricated the rear gunner. Another 500 lb. bomb exploded which threw the 3 rescuers to the ground. Flight Sergeant St. Germain quickly rose and threw himself upon a victim in order to shield him from flying debris. Air Commodore Ross’s arm was practically severed between the wrist and elbow by the second explosion. He calmly walked to the ambulance and an emergency amputation was performed on arrival at station sick quarters. Meanwhile, Corporal Marquet had inspected the surroundings, and seeing petrol running down towards two nearby aircraft, directed their removal from the vicinity by tractor. Leading Aircraftmen McKenzie and Wolfe rendered valuable assistance in trying to bring the fire under control and they also helped to extricate the trapped rear gunner both being seriously injured by flying debris. Air Commodore Ross showed fine leadership and great heroism in an action which resulted in the saving of the lives of the pilot and rear gunner. He was ably assisted by Flight Sergeant St. Germain and Corporal Marquet who both displayed courage of a high order. Valuable service was also rendered by Leading Aircraftmen McKenzie and Wolfe in circumstances of great danger.