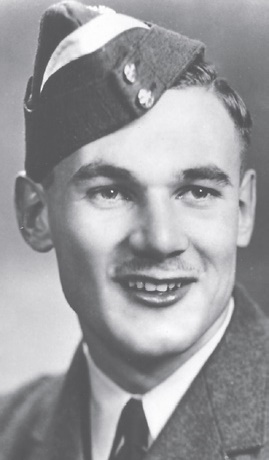 On 14 May 1943 Sgt Dana Anthony Nelson fainted at the controls of an Avro Anson bomber on an aircrew training flight near London, Ontario. None of the trainees on board could fly the plane but Leading Aircraftman K G Spooner, persuaded the three others to bail out while he attempted to land the Anson. He and the unconscious pilot were killed when it crashed into Lake Erie.

Royal Canadian Air Force THE KING has been graciously pleased to approve the following Award: George Cross (Posthumous) R.179314 Leading Aircraftman Kenneth Gerald Spooner (Deceased), No. 4 Air Observer School. “This airman, a student Navigator with no pilot training displayed great courage, resolution and unselfishness in the face of harassing circumstances when the pilot of the aircraft fainted at the controls. While other crew members were vainly trying to remove him from his seat he temporarily regained consciousness and froze on the controls causing the aircraft to loose altitude rapidly. Immediately after the pilot became indisposed, L.A.C. Spooner, with extreme coolness and courage assumed charge, ordered the remainder of the crew to bail out while he took over the controls and endeavoured to keep the aircraft at a safe height. Three members of the crew bailed out as instructed and shortly after the aircraft crashed carrying the unconscious pilot and L.A.C. Spooner to their death. The crash occurred approximately one hour after the pilot had lost control. This airman, with complete disregard for his personal safety and in conformity with the highest tradition of the Service sacrificed his life in order to save the lives of his comrades.” (The Canada Gazette, Vol. 78, no. 1, 1 January 1944, p. 32) St. James’s Palace, S.W.1. 7th January, 1944. The KING has been graciously pleased, on the advice of His Majesty’s Canadian Ministers, to approve the posthumous award of the GEORGE CROSS to the undermentioned:– R.179314 Leading Aircraftman Kenneth Gerald Spooner (deceased), Royal Canadian Air Force.