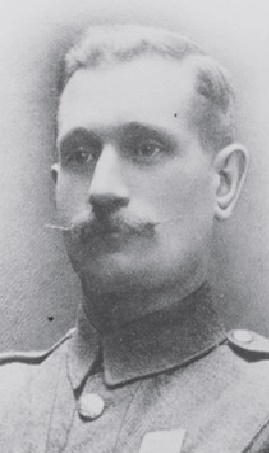 On 23 August 1914, faced with an overwhelming attack by five German infantry corps along the Mons-Condé Canal in Belgium, the BEF determined to blow up the canal bridges to halt the German advance. At Jemappes, just west of Mons, Lance Corporal C A Jarvis, 57th Field Company, Royal Engineers and Sapper Neary were ordered to fix charges to the bridge at Number 2 Lock. ‘A’ Company, Royal Scots Fusiliers, holding a barricade at the north end of the bridge was driven off to the south while Jarvis and Neary were working with a boat under the bridge. The exploder (electric detonator) and leads were held by another party and Jarvis sent Neary to fetch them. Enemy fire was now so intense that it was decided to retire and the destruction of the bridge became urgent. As Neary had not returned Jarvis was still without the exploder and leads. Working along the lock to a less exposed position, he crawled out into the street and was bicycling to find the exploder himself when he met Captain T Wright (later VC). Wright promised to fetch it and sent Jarvis back to the bridge. With the help of two Royal Scots Fusiliers, who held his boat in position, Jarvis once more attempted to fire the charges to demolish the bridge, before being forced to retire with the Fusiliers south to Frameries. It is not clear if Jarvis ever received the exploder but, contrary to his Citation, the bridge remained intact. Of the eight bridges allotted to 57 Field Company only the one east of Jarvis’ bridge, close to Jemappes station, was successfully blown.

For great gallantry at Jenappes on August 23rd in working for 1½ hours under heavy fire in full view of the enemy, and in successfully firing charges for the demolition of a bridge.