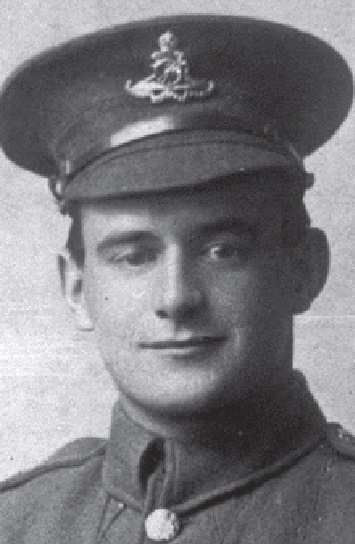 As the British retreat from Mons continued, General Sir Horace Smith-Dorrien decided on 26 August 1914 that due to the approach of von Kluck’s 1st Army, II Corps should stand and fight on the ridge south of Le Cateau-Cambrésis. The Battle of Le Cateau lasted two days (26-27 August 1914), and despite extreme exhaustion British troops inflicted heavy losses on the enemy while enabling the withdrawal to continue in good order. 2nd Battalion The King’s Own Yorkshire Light Infantry, part of 13th Brigade, was positioned just west of Le Cateau-Cambrésis, south of the Cambrai Road where the Reumont road crossed it. The Germans attacked early in the morning and in mid-afternoon, after heavy fighting General Smith-Dorrien gave the order to retire. ‘A’ Company, 2nd Battalion attempted to withdraw across open ground swept by German fire. Here Lance Corporal F W Holmes discovered Bugler H N Hawthorne lying in the open with both legs broken. Picking him up, he carried him out of danger and about two miles from the trenches, handed him over to stretcherbearers. (Hawthorne later returned to the battalion and was killed in action on 19 August 1918.) Holmes then ran back towards his previous position and on the way came across an 18-pounder out of action. One of its detachment who was still alive though wounded begged Holmes to save it. Holmes limbered up the gun and succeeded in evading the advancing Germans. Meanwhile two companies of the battalion, one commanded by Major C A L Yate, fought to the end at Le Cateau and the survivors were captured. In the same action Captain D Reynolds of 37th Battery Royal Field Artillery, which had fought through the Retreat from Mons, brought up two teams with volunteer drivers, including Drivers J H C Drain and F J Luke, in a desperate effort to rescue other guns threatened by the German advance. They managed to limber up two guns, but one entire team was immediately shot down and Driver Godley (not Godley VC), the driver of the centre pair of the other team, was killed. Reynolds, however, kept the remainder in hand and with the assistance of two other drivers brought one of the guns to safety. Le Cateau later became an Honour Title used in the full title of 93rd (previously the 37th) Battery RA. Subsequently, on 9 September 1914, during the First Battle of the Marne, Captain Reynolds carried out a successful close-range reconnaissance at Pisseloup, on the Marne, about fifty miles east of Paris.

At Le Cateau on 26th August, as volunteers, helping to save guns under fire from hostile infantry who were 100 yards away.