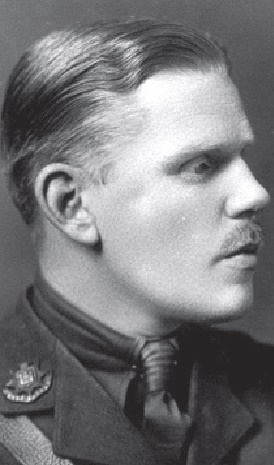 Hill 60 at Zwarteleen, about three miles south-east of Ypres, was formed of the spoil from a cutting on the Ypres to Comines railway. Held by the Germans since 10 December 1914, it was an excellent observation post for their artillery, commanding views of the British positions to the west. Since February, tunnellers of the Royal Engineers had been secretly excavating to lay five mines within the hill. On the evening of 17 April, these were detonated. The explosions killed 150 Germans and two of the sappers. British troops occupied the resulting craters and held off fierce enemy counter-attacks on the four succeeding days. The German bombardment on the 20th was particularly intense. Lieutenant G R P Roupell, 1st Battalion The East Surrey Regiment, and the survivors of his Company somehow managed to maintain their position on the hill. On Roupell’s right flank Second Lieutenant B H Geary, commanding a platoon of C Company, East Surreys, was at work extending a trench up the side of the hill when German artillery blasted the parapet to pieces. Geary then led his men to help reinforce Roupell. Assisted by Private White, Geary managed to repel a file of Germans advancing up an old communication trench, before fighting off another party of the enemy that had infiltrated behind his men. At this point, sometime after 9.30pm A and C Companies of 9th Battalion London Regiment (Queen Victoria’s Rifles), led by Major P T Lees and Captain Westby, moved up the hill to a position between A and C Companies of the East Surreys. Geary linked up with Lees. Together they planned to consolidate their hold on the middle crater before charging the enemy on the left flank. However, by dawn Lees was dead and Geary, seeking to organize further reinforcements, was himself shot in the head, losing an eye. By the early hours of the 21st only 30 of the original 150 riflemen were left. Second Lieutenant G H Woolley took command of the defence of the right and middle craters, keeping up a ceaseless hail of bombs, backed up by rapid fire from his riflemen. Two NCOs, Pulleyn and Peabody, provided stalwart support, each earning the DCM. At dawn the Devons relieved them and only then, despite earlier orders to do so, did Woolley bring back his 14 survivors, but not before he had gone back to find a large bombing party of 60 well-armed and well-trained Northumberland Fusiliers and led them up to the craters, where they were to support the Devons. Woolley was the first Territorial officer to be awarded the VC. Meanwhile, at the foot of and to the east of the hill, B Company, 1st Battalion of the East Surreys, held a line of trench with D Company on its right, extending into the village of Zwarteleen. At 3pm on 20 April Private E Dwyer of B Company, who was alone in his section of trench, surrounded by dead and wounded, came under a hail of bombs thrown by Germans only 15 or 20 yards away. He in return flung bombs at the enemy to such effect that the enemy advance was stopped in its tracks until he was reinforced. In fact, Hill 60 was hopelessly exposed to enemy fire. It was recaptured by the Germans on 5 May 1915 (see 1 May 1915 below), partly as a result of their use of gas and they held it for the next two years. Four VCs were awarded for gallantry during the fighting on 20 and 21 April.

For most conspicuous bravery and determination on “Hill 60,” near Ypres, on April 20th and 21st, 1915, when he held the left crater with his platoon, some men of the Bedfordshire Regiment and a few reinforcements who came up during the evening and night. The crater was first exposed to very heavy artillery fire which broke down the defences, and afterwards throughout the night to repeated bomb attacks which filled it with dead and wounded. Each attack was, however, repulsed mainly owing to the splendid personal gallantry and example of Second Lieutenant Geary. At one time he used a rifle with great effect, at another threw hand grenades, and exposed himself with entire disregard to danger in order to see by the light of flares where the enemy were coming on. In the intervals between the attacks he spent his whole time arranging for the ammunition supply and for reinforcements. He was severely wounded just before daylight on 21st April.