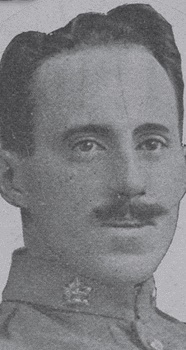 On 24th April, 1915, in the neighbourhood of Ypres, when a wounded man who was lying some 15 yards from the trench called for help, Company Serjeant-Major Hall endeavoured to reach him in the face of very heavy enfilade fire which was being poured in by the enemy. The first attempt failed, and a Non-commissioned Officer and private soldier who were attempting to give assistance were both wounded. Company Serjeant-Major Hall then made a second most gallant attempt, and was in the act of lifting up the wounded man to bring him in when he fell mortally wounded in the head.