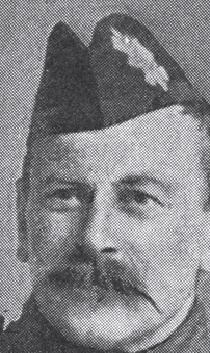 The British had failed to capture the Aubers Ridge, south-west of Armentières, during the Battle of Neuve Chapelle 10-12 March 1915. On 9 May 1915, to support General Joffre’s offensive at Vimy Ridge to the south in the Second Battle of Artois, a second attempt was made to secure a foothold on the Ridge. The plan was to breach the German line by attacking it along the Rue du Bois just to the south-west of Neuve Chapelle and at Rouges Bancs, between Pétillon and Fromelles, about three miles to the north-east. However, the Germans had reinforced their line since March and the preliminary artillery bombardment failed to make much impression on the enemy defences. In the southern sector the initial British attack at 5.40am failed and a second, launched at 7am was equally unsuccessful. A further attack was therefore ordered for 12.40pm but was postponed until 4pm. During this final assault, A Company, 1st Battalion Black Watch, of which Private J Ripley was a member, crossed 300 yards of no man’s land. Ripley found a gap in the wire and was the first man of the battalion to climb the German parapet. He then led his section on to a second line of trenches. However, with nearly all his companions killed and he himself hit by a bullet which entered near his left eye and exited near his left ear, he had to make his way back to the British line. Closer to Neuve Chapelle, the men of 2nd Battalion Black Watch were mown down by machine-gun fire after covering less than 30 yards. Lance-Corporal D Finlay was knocked unconscious by a shell burst but, recovering, led a bombing party of 12 men in an attack on the German trenches. Eventually he ordered the two survivors to crawl back, while he rescued a wounded man. In the northern sector around Rouges Bancs, the British fared little better. Two Companies of the Sherwood Foresters suffered heavy casualties in the initial assault and A and C Companies took part in the second attack. During this stage of the battle Corporal J Upton rescued a number of wounded men while under heavy fire. Despite being stunned by an exploding shell he remained in front of the Allied parapet until 10pm tending to the injured. Meanwhile, men of C and D Companies, Second Battalion The Lincolnshire Regiment were ordered by the brigade commander, Brigadier General A W G Lowry Cole to cross no man’s land by a newly dug sap to a mine crater and work along the German front line towards the Rifle Brigade. Corporal C R Sharpe succeeded in capturing a portion of German trench and with four of his men held it for the rest of the day by which time it was recognized that the German defences were too strong for further attacks to succeed. The second attempt to secure a foothold on Aubers Ridge had proved a costly failure for the British, who had suffered 11,500 casualties.

For most conspicuous bravery at Rue du Bois on 9th May, 1915. When leading his section on the right of the right platoon in the assault, he was the first man of the battalion to ascend the enemy’s parapet, and from there he directed those following him to the gaps in the German wire entanglements. He then led his section through a breach in the parapet to a second line of trench, which had previously been decided upon as the final objective in this part of our line. In that position Corporal Ripley, with seven or eight men, established himself, blocking both flanks and arranging a fire position, which he continued to defend until all his men had fallen and he himself had been badly wounded in the head.