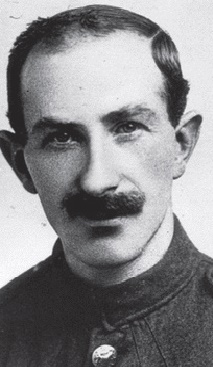 After the Battle of Aubers Ridge the British attempted to drive south from the Rue du Bois, which ran south-west from Neuve Chapelle towards Béthune, bisecting on its way the route south from Richebourg to Festubert. Amongst other objectives, the British were heading towards La Quinque Rue which ran to the south and parallel to the Rue du Bois north-east of Festubert. After a lengthy artillery barrage, the attack of the 2nd and Meerut Divisions, which opened the Battle of Festubert, began at 11.30pm on 15 May 1915, with a further stage of the assault beginning at 3.30am on the 16th. Among the troops taking part were the 1st Battalion The King’s (Liverpool) Regiment and 1st Battalion Royal Welsh Fusiliers. Lance- Corporal J H Tombs, B Company, 1st Battalion The King’s Regiment, rescued a number of wounded men from no man’s land during the attack, though wounded in the stomach by shrapnel. Company Sergeant Major F Barter, Royal Welsh Fusiliers, distinguished himself by his actions in the first line of German trenches. During the night of 16/17 May the Germans began to withdraw to a new line three quarters of a mile back. On 17 May 1915 the Sirhind Brigade, part of Lahore Division, was sent to the front line south of Richebourg, and north-east of Festubert. One company of the 15th Ludhiana Sikhs under Captain Hyde-Cates, with a company of the 1st Battalion Highland Light Infantry, took over 200 yards of captured trench 500 yards south-east of the Rue du Bois, but were under constant attack and in danger of running out of ammunition. Attempts to supply them were unsuccessful. As Bombing Officer, Lieutenant J G Smyth was asked if he could reach their position. At mid-afternoon on the 18th, with ten volunteers, Smyth set out across several hundred yards of no man’s land swept by machine-gun fire. Only he and Sepoy Lal Singh survived. Lal Singh was mortally wounded as they reached the trench. However, he and Smyth succeeded in transporting 96 bombs and bandoliers of ammunition to the defenders. Smyth returned from the trench under the cover of darkness. Nine of the men who had accompanied him were posthumously decorated with the Indian Distinguished Service Medal and Lance- Naik Mangal Singh with the IOM 2nd Class. That same day the 7th Division, including the Royal Welsh Fusiliers, was relieved by the Canadians. The King’s Regiment was relieved on the night of 19 May. The battle continued until 25 May. The British had pushed the Germans back about 600 yards on a front of 4,000 yards but at the expense of 16,600 casualties compared to 5,000 suffered by the enemy.

For most conspicuous gallantry near Rue du Bois, on 16th June, 1915. On his own initiative he crawled out repeatedly under a very heavy shell and machine gun fire, to bring in wounded men who were lying about 100 yards in front of our trenches. He rescued four men, one of whom he dragged back by means of a rifle sling placed round his own neck and the man’s body. This man was so severely wounded that unless he had been immediately attended to he must have died.