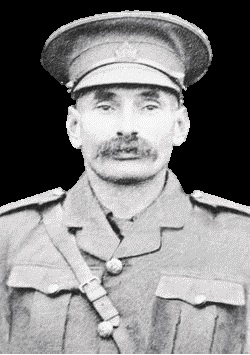 In June 1915 the British tried to advance on La Bassée to the east of Festubert and Givenchy. As part of the assault, 1st Battalion The Western Ontario Regiment was ordered to capture 150 yards of German trench near Givenchy and the German stronghold known as Stony Mountain at its northern end. The Canadians attacked at 6pm on 15 June. Despite the failure of a mine to damage the enemy line, the Canadians captured the German trench but not Stony Mountain, from which the Germans kept up a withering fire. Lieutenant F W Campbell, the Regiment’s Machine-Gun Officer, had advanced with two machine-gun detachments, but only one reached the German line and by the time the Germans counterattacked, Campbell had only Private H Vincent left under his command. As the gun’s base was damaged, Campbell mounted it on Private Vincent’s back and fired 1,000 rounds. When their ammunition was exhausted he ordered Vincent to save the gun. He himself had been mortally wounded but was carried back to the lines by Company Sergeant Major C Owen.

For most conspicuous bravery on 15th June, 1915, during the action at Givenchy. Lieutenant Campbell took two machine-guns over the parapet, arrived at the German first line with one gun, and maintained his position there, under very heavy rifle, machine-gun, and bomb fire, notwithstanding the fact that almost the whole of his detachment had then been killed or wounded. When our supply of bombs had become exhausted, this Officer advanced his gun still further to an exposed position, and, by firing about 1,000 rounds, succeeded in holding back the enemy’s counter-attack. This very gallant officer was subsequently wounded, and has since died.