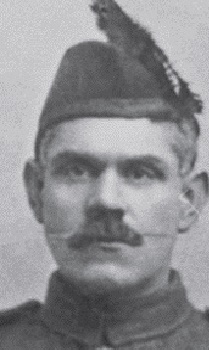 At 6.30am on 25 September 1915, after a four-day preliminary bombardment, the British launched the Battle of Loos, a major offensive north of Lens to support the planned French advance south of the city. At this point, the front ran roughly due south from the Canal d’Aire, which linked Béthune in the west with La Bassée to the east. It passed east of Vermelles and Grenay but west of Loos. However, the Germans had a secondary defensive line a mile or so further east, which ran just west of La Bassée, then south in front of Haisnes and Hulluch until it reached Cité St Auguste, where it curved west round the base of Hill 70 to defend Cité St Laurent and Lens itself. The British used chlorine gas in the attack but in the centre of the line, east of Vermelles, adverse wind conditions carried the gas back over British positions. The 2nd Battalion The South Staffordshire Regiment, 6th Brigade, was at Cuinchy, on the south bank of the Canal d’Aire. At Zero Hour on the 25th, Captain A F G Kilby at his own request led C Company west along the towpath in an unsuccessful attempt to capture Embankment Redoubt, which he had reconnoitred earlier in the month. Just over a mile and half to the south 2nd Battalion The Royal Warwickshire Regiment was in the line between Vermelles and the mining village of Cité St Elie, north of Hulluch. When the attack was launched the Warwickshires soon discovered that, despite the four-day bombardment, the Germans’ defensive wire remained intact. One of their men Private A Vickers helped cut the wire which enabled the Battalion to advance and capture the German front line before being halted at 9.30am on reaching the German second line at Cité St Elie. The 2nd Battalion King’s Royal Rifle Corps and 1st Battalion The Loyal North Lancashire Regiment were south of the Vermelles to Hulluch road. They also had to deal with uncut wire and were badly affected by chlorine gas, blowing back over British lines. By 8am they had been forced to retire to reorganize and it was then that Private H E Kenny rescued a number of wounded men from exposed positions in the field. At the same time Private G S Peachment made a brave attempt to rescue his wounded company commander, Captain G R Dubs, whose orderly he was, but was killed in the attempt. 1st Battalion The Northamptonshire Regiment, and 2nd Battalion Royal Sussex Regiment, who were to the rear of them near Le Rutoire, then took part in a second assault, which also failed because of the uncut wire. It was during this phase of the battle that Sergeant H Wells distinguished himself and was killed, while Captain A M Read managed to rally several groups of disorganised troops before being shot. To their south and south of the Vermelles to Loos road was 7th Battalion King’s Own Scottish Borderers. British gas was a problem here too but Piper D L Laidlaw mounted the parapet of the trench and piped the Battalion across no man’s land, until he was disabled by his wounds. The Borderers broke through the German front line and swept round north of Loos. To their south, British troops including the Black Watch and the Seaforth Highlanders, followed by the 10th Gordon Highlanders, had captured Loos and it began to look as if Lens might fall to the British. One of the obstacles that stood in their way was Hill 70. This was, in fact a low ridge, on the road south from La Bassée to Lens. Atop it was a German redoubt which commanded the surrounding area. British troops had managed to enter the redoubt but German machine-gun fire had forced them to withdraw. Royal Engineers had been sent to consolidate any positions taken by the British. Captain Cardew and No 3 Section RE reached Hill 70 at 9.30am. They dug in behind the ridge with a machine-gun but Cardew and Temporary Second Lieutenant F H Johnson then managed to get a party of Royal Engineers into the redoubt again only to be forced out once more. As Cardew had been wounded, Johnson led several further charges on the German redoubt. Despite Johnson’s gallant efforts, Hill 70 remained in German hands and two years’ later, in September 1917, it was the site of further fighting when it was taken by Canadian troops.

For most conspicuous bravery prior to an assault on German trenches near Loos and Hill 70 on 25th September, 1915. During the worst of the bombardment, when the attack was about to commence, Piper Laidlaw, seeing that his company was somewhat shaken from the effects of gas, with absolute coolness and disregard of danger mounted the parapet, marched up and down and played his company out of the trench. The effect of his splendid example was immediate, and the company dashed out to the assault. Piper Laidlaw continued playing his pipes until he was wounded.