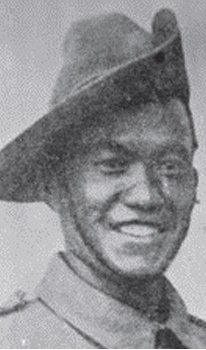 Early on the morning of 25 September 1915 in order to divert German resources from the Battle of Loos, the Garhwal and Bareilly Brigades, together with the 12th Battalion Rifle Brigade, attacked the enemy line at Piètre, just north-west of Aubers on the Fauquissart road. The British used gas but the wind carried this back across their own lines with disastrous consequences. Despite this, the 2nd Battalion Black Watch captured the German front and second lines and by 11am a company of 12th Battalion Rifle Brigade moved into the enemy front line. However, a German counter-attack thirty minutes later forced them to withdraw. Meanwhile, the attack by 2nd Battalion 3rd Gurkha Rifles was faring less well. Most of No 4 Double Company were cut down by German fire and only Lieutenant Wood and four men reached the German front line where all but Rifleman Kulbir Thapa were killed. Between the first and second German trenches he found a wounded Private of the 2nd Leicesters. Staying with the man until the next morning, he was able to lead him back to the British line before undertaking further rescues. Temporary Lieutenant G A Maling RAMC distinguished himself throughout the action.

For most conspicuous bravery during operations against the German trenches south of Mauquissart. When himself wounded, on the 25th September, 1915, he found a badly wounded soldier of the 2nd Leicestershire Regiment behind the first line German trench, and, though urged by the British soldier to save himself, he remained with him all day and night. In the early morning of the 26th September, in misty weather, he brought him out through the German wire, and, leaving him in a place of comparative safety, returned and brought in two wounded Gurkhas one after the other. He then went back in broad daylight for the British soldier and brought him in also, carrying him most of the way and being at most points under the enemy’s fire.