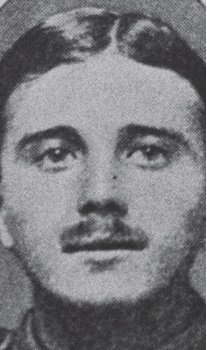 1st Battalion The Hertfordshire Regiment, was held in reserve at the opening of the Battle of Loos, but was then moved up to relieve 1st Battalion King’s (Liverpool Regiment) at Cuinchy, just south of the Canal d’Aire, about halfway between Béthune and La Bassée (see 25 September 1915 above).

For most conspicuous bravery at Cuinchy on 27th September, 1915. His company had lined the front trench preparatory to an attack when a large minenwerfer bomb fell into the trench. Corporal Burt, who well knew the destructive power of this class of bomb, might easily have got under cover behind a traverse, but he immediately went forward, put his foot on the fuse, wrenched it out of the bomb and threw it over the parapet, thus rendering the bomb innocuous. His presence of mind and great pluck saved the lives of others in the traverse.