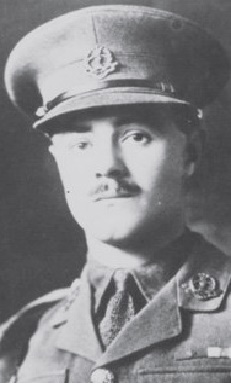 The German Spring offensive advanced rapidly to the west. Péronne on the River Somme fell on 23 March. It was therefore vital for the British, if they were to halt the advance, to hold any bridges across the Somme which had not been destroyed. At Éterpigny, just south of Péronne, the bridge was defended by men of 2nd Battalion The Middlesex Regiment, under Captain A M Toye, who valiantly maintained their position. However, the Germans succeeded in crossing the river elsewhere and surrounded the defenders. Toye managed to fight his way out with a few survivors. He then assumed command of seventy men of the 7th Battalion Durham Light Infantry and established a position on the Éterpigny to Villers- Carbonnel Road until reinforcements arrived. He also distinguished himself by his gallantry at Rosières on 26-27 March, at Caix on the 28th, Moreuil on the 31st and Villers-Bretonneux on 24 April.

For most conspicuous bravery and fine leadership displayed in extremely critical circumstances. When the enemy captured the trench at a bridge-head, he three times re-established the post, which was eventually recaptured by fresh enemy attacks. After ascertaining that his three other posts were cut off, he fought his way through the enemy with one officer and six men of his company. Finding 70 men of the battalion on his left retiring, he collected them, counter-attacked, and took up a line which he maintained until reinforcements arrived. Without this action, the defence of the bridge must have been turned. In two subsequent operations, when in command of a composite company, he covered the retirement of his battalion with skill and courage. Later, with a party of battalion headquarters, he pressed through the enemy in the village, firing at them in the streets, thus covering the left flank of the battalion retirement. Finally, on a still later occasion, when in command of a mixed force of the brigade, he re-established, after hard fighting, a line that had been abandoned before his arrival. He was twice wounded within ten days, but remained at duty. His valour and skilful leading throughout this prolonged period of intense operations was most conspicuous.