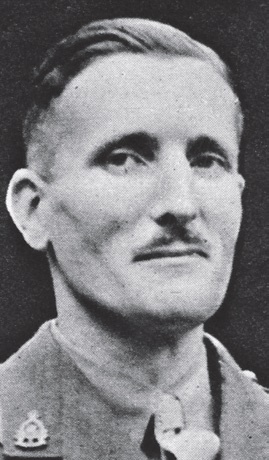 After Italy declared war on France and Britain on 10 June 1940, Malta was immediately vulnerable to attack. It is only sixty miles from the coast of Sicily and, as one of the Royal Navy’s most important bases, it also posed a significant threat to Italian ambitions in the Western Mediterranean. The first Italian air raid took place the following day. There were no RE Bomb Disposal units on the island and until one arrived, the military had to cope as best they could. Between 10 June and mid-November 1940 Captain R L J Jones and Lieutenant W M Eastman, RAOC, dealt with some 275 unexploded bombs.

The KING has been graciously pleased to approve the award of the GEORGE CROSS, for most conspicuous gallantry in carrying out very hazardous work, to:– Captain (Ordnance Officer 4th Class) Robert Llewellyn Jephson Jones, Royal Army Ordnance Corps. - Lieutenant William Marsden Eastman, Royal Army Ordnance Corps.On various dates Captain Jones and Lieutenant Eastman have worked under dangerous conditions and performed acts of gallantry in dealing with unexploded bombs which were in a highly dangerous stage. They showed particular gallantry in dealing with a 1,100 pound bomb; two attempts were made to explode it but failed. At the third attempt when it was in a most dangerous state they succeeded in detonating it. On another occasion these officers, assisted by a Master Rigger, removed a 400 pound Italian unexploded bomb, which had been under water in a twenty foot deep well for a week inside a house; fused at both ends the bomb was in a dangerous state. It has to be raised to the ground floor by means of a gyn, tackle, sling and rope. There was a possibility of the sling slipping while the bomb was being hauled up; it was two and a half feet long and the mouth of the well only three feet one inch wide. Lieutenant Eastman guided it from the floor of the well, whilst Captain Jones guided it through the opening. It was got out although there was only a six inch clearance as it came through. (TNA, WO/373/106)