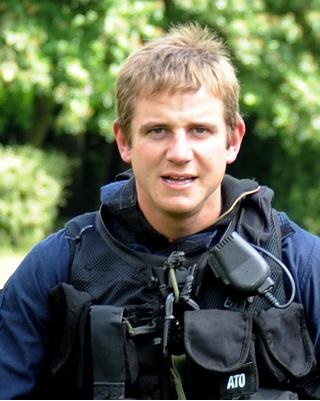 Staff Sergeant Schmid was a High Threat Improvised Explosive Device Disposal (IEDD) Operator in Helmand from June 2009 until his death in action on 31 October 2009. He deployed at the height of Operation PANTHER’S CLAW and went immediately into the fray, into one of the most physically draining, mentally intense and hazardous jobs in Helmand. Typically having to deploy on foot, thereby precluding the option of specialist protective equipment and severely limiting the use of remote controlled vehicles, he spent long periods of time in close proximity to Victim Operated IEDs (VOIED) and in the gravest personal danger. Before his death in action he responded to 42 IED tasks, personally dealing with 70 confirmed IEDs. A number of examples illustrate his bravery. An infantry company based in Wishtan province was isolated by a substantial minefield and the infamous Pharmacy Road, the only resupply route, was blocked by a medium wheeled tractor and another vehicle, both blown up by very large IEDs. Intelligence, unenviable firsthand experience and numerous unexplained explosions from the area indicated that the area of the stricken vehicles was laced with IEDs. At 0800 hrs on 9 August 2009, as temperatures soared past 45ºC, Schmid started work. Within only a hundred metres he found and cleared an IED and once within 100 metres of the vehicles, intent on using a remote controlled vehicle (RCV) and remote explosive clearance devices, he deployed an RCV that struck an IED and was destroyed. Schmid moved forward without hesitation and, well inside the most lethal arc of any device, manually placed explosive charges, clearing a route to within 5 metres of the vehicles. His team then moved to clear a compound adjacent to the stricken vehicles to drag them off the road. When a second IED was found, Schmid made another manual approach and rapidly got rid of it. A new approach to the vehicles from the compound was explosively created for the hulks to be dragged clear. Schmid painstakingly cleared up to both vehicles and his first trip took an hour. He was relying on his eyesight and his understanding of enemy tactics alone. Despite the threat, Schmid again decided against explosive clearance; time was critical so he placed heavy and cumbersome chains onto the stricken vehicles, the riskiest of enterprises given the very high likelihood of booby traps, and the vehicles were finally dragged clear. As light started to fade, Schmid then personally led a high risk clearance of the road where the vehicles had been, manually disposing of two further IEDs. The clearance had lasted 11 hours. It was physically, mentally and emotionally draining, but the road was open and the company resupplied. The resounding success of this battlegroup operation was entirely due to the heroic, selfless acts of Schmid. On 8 October 2009 Schmid was tasked in Sangin District Centre to deal with an artillery shell reported by unmentored Afghan National Army (ANA) soldiers. On arrival the ANA led him, unsuspecting, directly to the device. He was now not only at grave personal risk but immediately realised that the many unsuspecting civilians around him in the bustling bazaar were also in peril. Time was not on his side. He quickly assessed that the shell was in fact part of a live Radio Controlled IED intended to cause maximum casualties in a well populated area. The nature of the device also meant it was almost certainly over-watched by the bomber controlling it. Without any consideration for his own safety, Schmid immediately decided to neutralise the IED manually. To do this he knew he was employing a render safe procedure that should only ever be employed in the gravest of circumstances and which is conducted at the highest personal risk to the operator. In an instant, Schmid made the most courageous decision possible, consciously placing his own life on the line in order to save the lives of countless Afghan civilians and demonstrating bravery of the highest order and well beyond the call of duty. At the end of October 2009 Schmid was involved in an operation near Forward Operating Base JACKSON in Battle Group North’s area. Having dealt with three IEDs already that day, Schmid and his team were transiting to another compound when a searcher discovered a command wire running down the alleyway they were using. Schmid and his team were trapped in the alleyway with no safe route forward or back as they did not know in which direction the IED was situated. Knowing that his team were in potential danger, he immediately took action to reduce the hazard. Schmid eventually traced the wire to a complex command wire IED in that it incorporated three linked buried main charges. He was killed whilst dealing with the device. Schmid’s actions on that fateful day, when trapped in an alleyway with no safe means of escape, probably saved the lives of his team. These occasions are representative of the complexity and danger that Schmid had faced daily throughout his four month tour. His selfless gallantry, his devotion to duty, and his indefatigable courage displayed time and time again saved countless military and civilian lives and is worthy of the highest recognition.