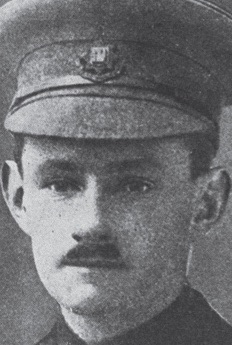 The Hohenzollern Redoubt was a German strongpoint, south-west of Haisnes. It was connected to the main German line by communication trenches, most notably ‘Little Willie’ running north and ‘Big Willie’ running south-east. It was attacked on 25 September 1915, the opening day of the Battle of Loos, and mostly captured. On 27 September 1915, Corporal J D Pollock, 5th Battalion Queen’s Own Cameron Highlanders, was among troops sent to reinforce British positions and by his bravery helped to check a German advance. On 29 September 1915 A and B Companies, 1st Battalion The York and Lancaster Regiment, and 2nd Battalion The East Surrey Regiment were sent forward to strengthen the British position. The York and Lancasters were advancing along ‘Big Willie’ trench to the south-east to relieve the East Kent Regiment in Dump Trench when at 6am the Germans attacked. Private S Harvey volunteered to fetch more bombs to help repel them. Meanwhile the 2nd East Surreys attacked ‘Little Willie’ trench, which ran northwards. The Germans were moving down the trench and threatening the Redoubt. The East Surreys were pushed back but Temporary Second Lieutenant A J T Fleming-Sandes by his gallant action helped stabilize the situation. The Hohenzollern Redoubt was lost again on 3 October. Fighting continued there and on 13 October, as part of the final British offensive during the Battle of Loos, an attempt to recapture it failed.

For most conspicuous bravery at Hohenzollern redoubt on 29th September, 1915. Second Lieutenant Fleming-Sandes was sent to command a company which at the time was in a very critical position. The troops on his right were retiring and his own men, who were much shaken by continual bombing and machine-gun fire, were also beginning to retire owing to shortage of bombs. Taking in the situation at a glance, he collected a few bombs, jumped on to the parapet in full view of the Germans, who were only twenty yards away, and threw them. Although very severely wounded almost at once by a bomb, he struggled to his feet and continued to advance and throw bombs till he was again severely wounded. This most gallant act put new heart into his men, rallied them and saved the situation.
Amendment. The first Christian name of Second Lieutenant A. J. T. Fleming-Sandes, V.C., 2nd Battalion, The East Surrey Regiment, is “Alfred,” and not as published in the London Gazette of the 18th instant. (The London Gazette of 26 November 1915, Numb. 29381, p. 11765)