Born 31st March 1934 in Kendal, Westmorland, where he then grew up, Carl Walker GC joined the RAF Police in 1952 and then Lancashire Constabulary in October 1954. He left the following year and became a joiner only to re-join, this time the Blackpool Borough Force as a Police Constable in 1959. In 1961 he received a Commendation and his GC action took place on 23rd August ten years later. He was promoted to Sergeant and then Inspector in 1976. He left the Police as a result of the wounds he suffered from the GC action in November 1982 after which Carl bought a share in a taxi company. Carl served on the VC and GC Association committee from 1990 to 1994 and again from 2003 until 2014. Carl's beloved wife, Kathleen, died in 2018. He has one son and continues to live near Blackpool. 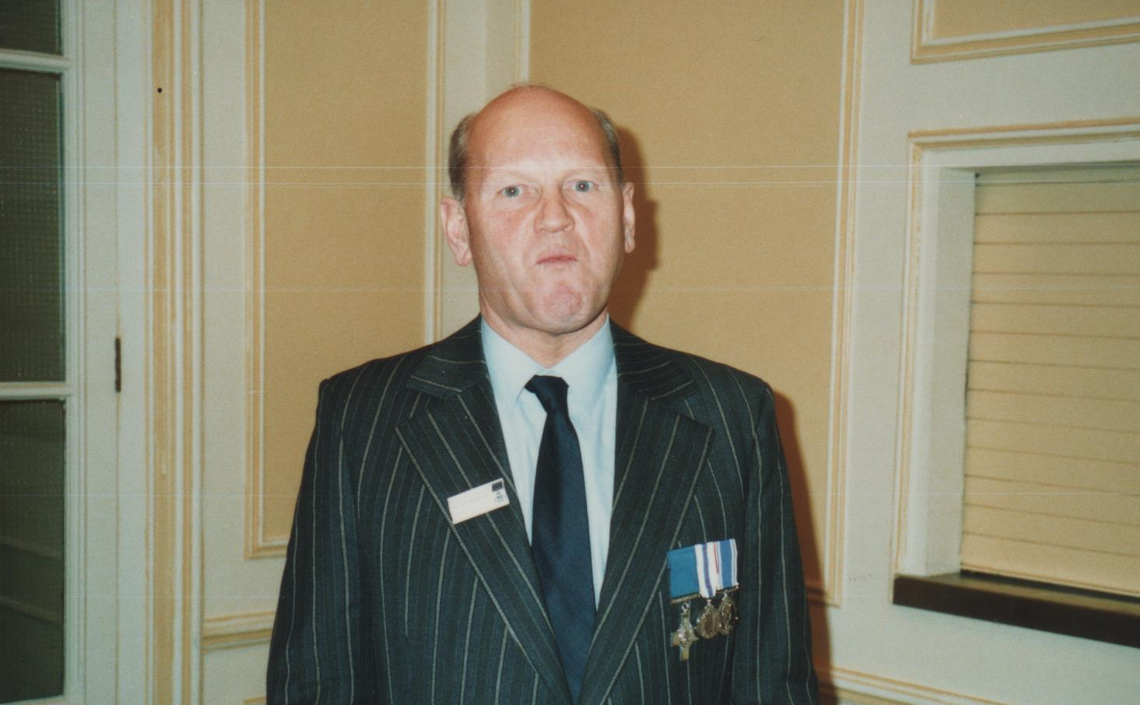 Following an armed robbery at a jewellers in BIackpool, Constable Walker, having been directed to the scene by radio, arrived to see the bandits running towards a Triumph Estate car. All the men succeeded in getting into the car and a shotgun was pointed through the window at P.C. Walker; the car was then driven away followed by the Constable.

A chase at high speeds then ensued; at several stages Constable Walker lost contact briefly with the Triumph but came upon it stationary in a blind alley. All the occupants were out of their car; the Constable remained in his Panda car which he parked at right angles to the alley, thus blocking the exit. The men then climbed back into the Triumph which was reversed at a fast speed down the alley into the side of the Panda car. As the car drove away from the alley Constable Hampson arrived on the scene in his Panda car. He saw Constable Walker sitting in his car, in a shocked condition, and he followed the Triumph.

The bandit's car was driven in a fast and dangerous manner through various streets and Constable Hampson during the whole of this chase remained five to ten yards behind the Triumph relaying his position to Blackpool Central by personal radio. The Triumph suddenly screeched to a halt and Constable Hampson pulled up about five or six yards behind it. One of the gunmen ran back to the Panda car and shot the Constable through the passenger door window of the Panda car. The Constable, who was badly wounded in the chest, fell from the car into the roadway but managed to raise himself, reached his radio transmitter and gave his position to Control Room.

Constable Hillis got out of his police car and saw the five men who were then retreating from the crashed car. The officer ran towards them and the driver of the Triumph pointed a pistol at him and fired two or three shots from a distance of about six feet, but did not hit him.

Constable Hillis raised his arm in front of his face and when at this stage one of the robbers broke away, he ran after him and caught him after a violent struggle. In the meantime, another police car had arrived at the scene with Inspector Gray, Inspector Redpath and Superintendent Richardson. Inspector Redpath got out of the car and then the officers saw three of the gunmen, running towards an alley.

Inspector Redpath ran after them. Inspector Gray with Superintendent Richardson drove into the next road in an effort to head them off. The three men were by now running along the alley, followed by Constables Walker and Jackson and when Constable Walker was about ten yards from the bandits the driver of the Triumph turned and fired a shot at him. The officer carried on running towards him, and when the man reached the end of the alley he turned to face the Constable and fired a second time; at a distance of about six feet he fired a third time and hit him in the groin. The man pointed the gun at Constable Walker again, looked at the officer who was clutching his injured leg, then turned away towards a Ford Transit delivery van which was parked outside a butcher's shop. The man jumped into the driving seat of the butcher's van, and two of the men ran to the back of the van and jumped in just as Inspector Gray and Superintendent Richardson arrived on the scene in their police car; the butcher's van moved off rapidly.

The other two bandits were seen by Sergeant Mackay and Constable Hanley, who had just arrived in the area in a C.I.D. car. These officers, still in their car, entered the pursuit and caught up with the two fugitives, one of whom levelled his pistol at Sergeant Mackay's head as the C.I.D. car drew alongside him. The Sergeant swung the driver's door open and it struck the man, knocking him off balance. The police car stalled and Constable Hanley, who was getting out of the passenger door, stumbled and fell. Both men ran off with Constable Hanley and other officers chasing them on foot. Sergeant Mackay re-started the police car and drove after them, he quickly overtook the men and they turned round; one, who was only about six feet from the front of the car, levelled the revolver at Sergeant Mackay and pulled the trigger, but the gun did not fire. The Sergeant drove the car directly at the two men knocking them off balance, he knocked them off their feet several times by driving at them, he then got out of the police car and ran towards one of the men. During the chase through the alleys the men had run almost all the way back to the butcher's shop where Constable Walker had been shot.

Inspector Redpath, who was still outside the butcher's shop, saw them emerge from the end of the alley, running directly towards him. Sergeant Mackay was immediately behind one of them and closing on him. The Inspector saw that he was carrying a revolver but he stood his ground waiting for him to come closer. The Sergeant then crash-tackled the man and brought him to the ground with his arms sprawled out in front of him, immediately in front of Inspector Redpath, who kicked the gun out of his hand. Constable Hanley, who was chasing the other man, knocked him down and arrested him.

Throughout the pursuit which followed the robbery, all the police officers concerned were aware that they faced the threat of death or serious injury, but gave no thought to their own safety in their efforts to effect the arrest of armed and dangerous criminals.