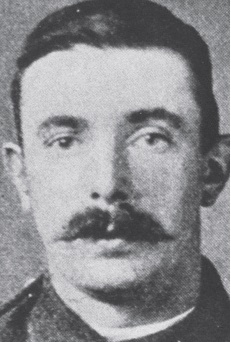 The slagheap, Fosse 7, and Quality Street trench lay just south of the Lens-Béthune Road, north-west of Loos. On 11 October 1915, A Battery, 71st Brigade, Royal Field Artillery, which was stationed there, came under heavy German bombardment. During the action Sergeant J C Raynes gallantly rescued his wounded friend Sergeant Ayres. Sadly, Ayres was killed by a German shell a few minutes later. The following day Raynes was in the battery cookhouse in Quality Street trench when it was hit by an enemy shell and assisted with the rescue of the other men there.

On 11th October, 1915, at Fosse 7 de Bethune, his battery was being heavily bombarded by armour-piercing and gas shells. On “Cease fire” being ordered Serjeant Raynes went out under an intense shell fire to assist Serjeant Ayres, who was lying wounded forty yards away. He bandaged him, and returned to his gun when it was again ordered into action. A few minutes later “Cease fire” was again ordered owing to the intensity of the enemy’s fire, and Serjeant Raynes, calling on two gunners to help him - both of whom were killed shortly afterwards - went out and carried Serjeant Ayres into a dug-out. A gas shell burst at the mouth of the dug-out, and Serjeant Raynes once more ran across the open, fetched his own smoke helmet, put it on Serjeant Ayres and then, himself badly gassed, staggered back to serve his gun. On 12th October, 1915, at Quality Street, a house was knocked down by a heavy shell, four men being buried in the house and four in the cellar. The first man rescued was Serjeant Raynes, wounded in the head and leg, but he insisted on remaining under heavy shell fire to assist in the rescue of all the other men. Then, after having his wounds dressed, he reported himself immediately for duty with his battery, which was again being heavily shelled.