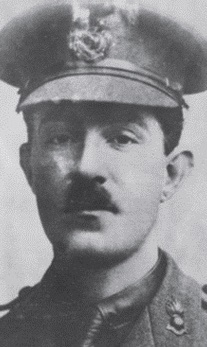 The Hohenzollern Redoubt had been the scene of fierce fighting since the beginning of the Battle of Loos. It had mostly fallen to the British on 25 September 1915 but was recaptured by the Germans on 3 October. On 13 October, as part of their final offensive during the Battle of Loos, the British attempted a further assault on it, using gas. Some of the cylinders began to leak, threatening disaster in the British trenches. The situation was saved by the gallantry of Corporal J L Dawson. At 5.30am the following day fifty men of D Company, 1/7th Sherwood Foresters, under Temporary Captain C G Vickers, relieved exhausted bombers in ‘Little Willie’ Trench, which approached the Redoubt from the north. Vickers himself hurled bombs over the barricade towards the Redoubt, while the Germans reciprocated. He also ordered a second barricade to be built behind him in the trench 30 yards to the north. This had been completed by the time the Germans destroyed the first barrier.

For most conspicuous bravery and devotion to duty on 13th October, 1915, at Hohenzollern Redoubt. During a gas attack, when the trenches were full of men, he walked backwards and forwards along the parados, fully exposed to a very heavy fire, in order to be the better able to give directions to his own sappers, and to clear the infantry out of the sections of the trench that were full of gas. Finding three leaking gas cylinders, he rolled them some 16 yards away from the trench, again under very heavy fire, and then fired rifle bullets into them to let the gas escape. There is no doubt that the cool gallantry of Corporal Dawson on this occasion saved many men from being gassed.