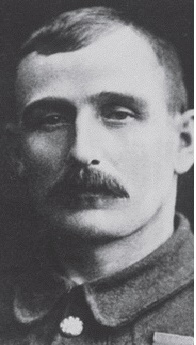 On 4 November 1915, Lieutenant P A Brown, 13th Battalion The Durham Light Infantry, was strengthening the British wire at La Houssoie, near Erquinghem, just south-west of Armentières when he was wounded. Private T Kenny succeeded in bringing him back to the British lines but Brown died shortly afterwards.

For most conspicuous bravery and devotion to duty on the night of 4th November, 1915, near La Houssoie. When on patrol in a thick fog with Lieutenant Brown, 13th Battalion, Durham Light Infantry, some Germans, who were lying out in a ditch in front of their parapet, opened fire and shot Lieutenant Brown through both thighs. Private Kenny, although heavily and repeatedly fired upon, crawled about for more than an hour with his wounded officer on his back, trying to find his way through the fog to our trenches. He refused more than once to go on alone, although told by Lieutenant Brown to do so. At last, when utterly exhausted, he came to a ditch which he recognised, placed Lieutenant Brown in it, and went to look for help. He found an officer and a few men of his battalion at a listening post, and after guiding them back, with their assistance Lieutenant Brown was brought in, although the Germans again opened heavy fire with rifles and machine-guns, and threw bombs at 30 yards distance. Private Kenny’s pluck, endurance and devotion to duty were beyond praise.