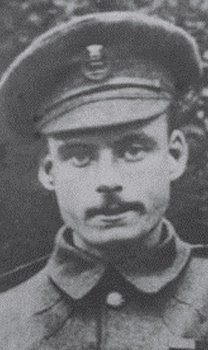 In 1915 the new German Chief of General Staff, General von Falkenhayn, decided to go on the defensive on the Western Front, while attempting to knock Russia out of the war. This decision posed a major problem for the British and French as they were all too aware that modern battlefield technology gave all the advantages to the defender. The one exception to this defensive strategy was a Spring offensive launched on 22 April 1915, when the Germans made a second attempt to take Ypres. At the north of the Ypres salient they released chlorine gas along a four-mile line from Steenstraat to the St Julien-Poelcapelle road. This was the first time chlorine had been used in warfare and its results were devastating. German troops were able to move forward and capture Steenstraat, Langemark and Pilkem ridge, only two and a half miles north of Ypres. Fortunately for the Allies, they then dug in rather than try to make further advances. Though British counter-attacks at Pilkem on 23 April and St Julien on 24 April were both thrown back, they took some compensation from the Germans’ failure to capitalise on the opportunities which their Spring offensive had brought. The Second Battle of Ypres continued until 25 May. While the Germans had driven the Allies into a defensive semi-circle two miles east of Ypres they had suffered casualties of 35,000 dead and wounded. Allied casualties were twice those of the enemy but importantly, they retained control of the Channel ports.
The French strategy for 1915 was to mount massive offensives and General Joffre judged that the best chance of success lay in attacking the sides of the bulge in the German line which extended south-westwards between Arras and Rheims. Joffre reasoned that a break through in Artois or Champagne-Argonne, would disrupt the Germans’ lines of supply and communications in northern France, and perhaps knock them off balance. These offensives were duly carried out, at great cost in lives and munitions, but to little effect. The British role was to relieve the French in some parts of the line so as to free troops for their offensives and to produce supporting or diversionary attacks as called for. In fact, the BEF’s first operation, an attack on the Aubers Ridge at Neuve Chapelle, south-west of Lille, between 10 and 12 March 1915, was independent of French needs and wishes. On 17 April the British attacked Hill 60, three miles south-east of Ypres. However, within a week, this initiative was to be overtaken by the German offensive in Flanders. On 9 May 1915, to support General Joffre’s offensive at Vimy Ridge, south of Lille, the British made another attempt to secure Aubers Ridge, which they had failed to capture in March. In the intervening period the Germans had improved their defences and the battle proved a costly failure for the British, who suffered 11,500 casualties. However, the chief British effort, though small by comparison with the scale of French operations, was between 15 and 27 May around Festubert, south of Neuve Chapelle and north of the Canal d’Aire. Thereafter, though it was plain to the British commanders in France that they needed time for the build-up of men and material, it was equally clear that, with the evident failure of the expedition to Gallipoli, where Allied troops had landed on 25 April in an attempt to open another front, the BEF in France should make a major effort in support of General Joffre’s autumn campaigns, the Second Battle of Artois and the Second Battle of Champagne. On 25 September, after a four day bombardment, the British launched the Battle of Loos, attacking the enemy south of the Canal d’Aire between Béthune and La Bassée, using chlorine gas. They succeeded in taking Loos. Lens just to the south seemed to be within their grasp but the Germans put up a stout resistance and managed to hold on. Fighting died down on 28 September. Another British offensive on 13 October failed and after that the deteriorating weather prevented further operations. Ironically, for the officers and men in the line, it was not always possible to distinguish ‘active’ and ‘quiet’ periods, and no fewer than twelve VCs were awarded for actions outside the main battles mentioned above.

For most conspicuous bravery on 16th November, 1915, near La Brique. A man of the West Yorkshire Regiment had been badly wounded and was lying in the open unable to move in full view of and about 300 to 400 yards from the enemy’s trenches. Corporal Stirk, Royal Army Medical Corps, and Private Caffrey at once started out to rescue him, but at the first attempt they were driven back by shrapnel fire. Soon afterwards they started again under close sniping and machine-gun fire, and succeeded in reaching and bandaging the wounded man, but, just as Corporal Stirk had lifted him on Private Caffrey’s back, he himself was shot in the head. Private Caffrey put down the wounded man, bandaged Corporal Stirk and helped him back into safety. He then returned and brought in the man of the West Yorkshire Regiment. He had made three journeys across the open under close and accurate fire and had risked his own life to save others with the utmost coolness and bravery.