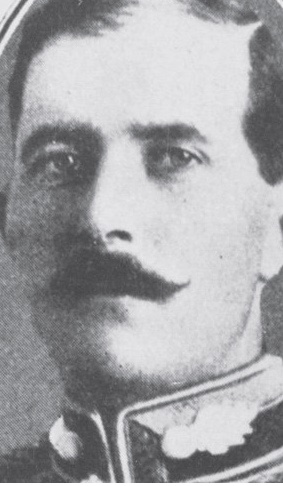 The landing at V Beach, Gallipoli, on 25 April 1915 had at terrible cost captured a narrow strip of shoreline bounded by a low bank, which provided some protection from Turkish fire. More troops were landed under cover of darkness but, fully to secure the beach, the enemy positions overlooking it would have to be captured on the next day. Three staff officers, Colonel W de L Williams, Lieutenant Colonel C H M Doughty-Wylie, and Captain G N Walford, who had been on board the River Clyde, now played a significant role. Williams led an attack westwards from the beach towards Fort No 1 in the hope of linking up with troops who might have been coming from W Beach. After Major A T Beckwith had pushed eastwards from the beach to capture the old fort of Sedd-el-Bahr, Walford led a successful attack on the village behind it in the course of which he was killed. Meanwhile, in the centre of the beach, Captain G D Stoney was ordered to advance with the survivors of 1st Battalion The Royal Munsters and take part in the planned assault on Hill 141 behind Sedd-el-Bahr. This necessitated clearing a path through barbed wire. When Sergeant Major Bennett who was leading the party deputed to cut it was killed, Corporal W Cosgrove took command and, braving heavy fire, succeeded in pulling up posts which supported the wire. This allowed his battalion to charge the Turkish trenches. After Walford’s death, Doughty-Wylie had assumed responsibility for the final clearing of Sedd-el-Bahr. He then coordinated and led the successful attack on Hill 141 and it was this which finally rendered V Beach secure. He was killed on the summit of the hill at the moment of victory.

On 26th April, 1915, subsequent to a landing having been effected on the beach at a point on the Gallipoli Peninsula, during which both Brigadier-General and Brigade Major had been killed, Lieutenant-Colonel Doughty-Wylie and Captain Walford organised and led an attack through and on both sides of the village of Sedd-el-Bahr on the Old Castle at the top of the hill inland. The enemy’s position was very strongly held and entrenched, and defended with concealed machine-guns and pom-poms. It was mainly due to the initiative, skill and great gallantry of these two Officers that the attack was a complete success. Both were killed in the moment of victory.