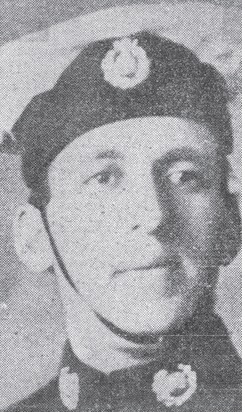 On 25 April 1915, while British troops were landing at beaches on the southern tip of Gallipoli, Australian and New Zealand forces made for Z Beach on the western seaward side of the peninsula, slightly to the north of Y Beach. Z beach ran north from Gaba Tepe, but the actual landing mistakenly took place slightly further north, just south of Ari Burnu which came to be known as Anzac Cove. Consequently, the Australians and New Zealanders found themselves faced with much higher ground than they expected which afforded the defending Turks a major strategic advantage. On 28 and 29 April 1915 four battalions of the Royal Naval Division landed at Anzac Cove to support those troops already ashore, and immediately took up positions on the front line, which stretched across 400 Plateau. One particularly exposed trench at McLaurin’s Hill at the northern end of the Plateau was manned by two platoons from C Company, Portsmouth Battalion, commanded by Lieutenants R W H M Empson and A B F Alcock. On 30 April the Turks counter-attacked, hoping to drive the Allies into the sea. Empson called for ammunition, water and medical assistance. Lance-Corporal W R Parker, a stretcher-bearer, was one of those who volunteered to respond. Pausing to help a wounded colleague, he was separated from the others but eventually reached the trench. Empson was killed during the fighting on 1 May. When on 2 May, with ammunition running out, Lieutenant Alcock decided to withdraw, Parker helped all the wounded men to safety but, in the course of this, was himself seriously wounded.

In recognition of his most conspicuous bravery and devotion to duty in the course of the Dardanelles operations. On the night of 30th April/1st May, 1915, a message asking for ammunition, water and medical stores was received from an isolated fire trench at Gaba Tepe. A party of Non-commissioned Officers and men were detailed to carry water and ammunition, and, in response to a call for a volunteer from among the stretcher bearers, Parker at once came forward; he had during the previous three days displayed conspicuous bravery and energy under fire whilst in charge of the Battalion stretcher bearers. Several men had already been killed in a previous attempt to bring assistance to the men holding the fire trench. To reach this trench it was necessary to traverse an area at least four hundred yards wide, which was completely exposed and swept by rifle fire. It was already daylight when the party emerged from shelter and at once one of the men was wounded: Parker organised a stretcher party and then going on alone succeeded in reaching the fire trench, all the water and ammunition carriers being either killed or wounded. After his arrival he rendered assistance to the wounded in the trench, displaying extreme courage and remaining cool and collected in very trying circumstances. The trench had finally to be evacuated and Parker helped to remove and attend the wounded, although he himself was seriously wounded during this operation.