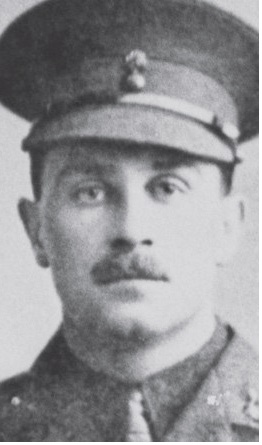 At the northern end of the Allied line across Cape Helles, behind Y Beach and parallel with the coast, ran Gully Spur. This was separated from Fir Tree Spur behind it by Gully Ravine. On 10 and 11 June 1915 the British had captured a section of the Turkish line, known as ‘Turkey Trench’, on the southern edge of Gully Ravine. On the evening of 18 June the Turks made a determined effort to recapture it. Captain G R O’Sullivan, 1st Battalion The Royal Inniskilling Fusiliers, took a prominent part in the fighting here and helped lead the bombing parties which recaptured the Trench in the early morning of the following day. This was the first of the actions referred to in his VC Citation. The second action is covered in the description of the action shared with Sergeant J Somers VC.

For most conspicuous bravery during operations south-west of Krithia, on the Gallipoli Peninsula. On the night of the 1st-2nd July, 1915, when it was essential that a portion of a trench which had been lost should be regained, Captain O’Sullivan, although not belonging to the troops at this point, volunteered to lead a party of bomb throwers to effect the recapture. He advanced in the open under a very heavy fire, and, in order to throw his bombs with greater effect, got up on the parapet where he was completely exposed to the fire of the enemy occupying the trench. He was finally wounded, but not before his inspiring example had led on his party to make further efforts, which resulted in the recapture of the trench. On the night of 18th-19th June, 1915, Captain O’Sullivan saved a critical situation in the same locality by his great personal gallantry and good leading.