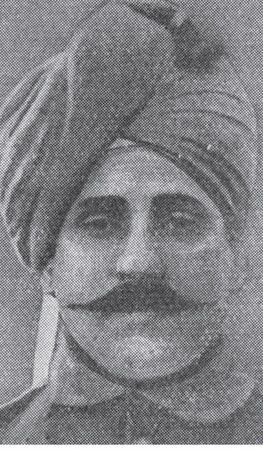 Advancing up the Tigris in the course of the first attempt to relieve General Townshend at Kutel- Amara, Lieutenant General Sir F J Aylmer VC had forced the Turks from their positions at Shaikh Sa-’ad on 8 January 1916 and at the Wadi on 13 January. To the west of the Wadi the next Turkish position on the Tigris was at Hanna. Here the Turks were well entrenched north of the river. Aylmer attacked on 21 January. The 41st Dogras were in the 35th Brigade, which advanced with the river on its left and 19th Brigade on its right. Unfortunately, the preliminary bombardment had made little impression on the Turkish barbed wire defences and the attackers were driven back with heavy casualties. Such was the cold that many of the wounded died of exposure. Of the men rescued by Lance Naik Lala, the Adjutant Lieutenant Lindop, later died of his wounds but Captain F L Nicholson, 37th Dogras, recovered. Captain J A Sinton VC, Indian Medical Service also distinguished himself in this action. Hanna was finally captured on 5 April 1916.

Finding a British officer of another regiment lying close to the enemy, he dragged him into a temporary shelter, which he himself had made, and in which he had already bandaged four wounded men. After bandaging his wounds he heard calls from the Adjutant of his own regiment who was lying in the open severely wounded. The enemy were not more than one hundred yards distant, and it seemed certain death to go out in that direction, but Lance Naik Lala insisted on going out to his Adjutant, and offered to crawl back with him on his back at once. When this was not permitted, he stripped off his own clothing to keep the wounded officer warmer, and stayed with him till just before dark, when he returned to the shelter. After dark he carried the first wounded officer back to the main trenches, and then, returning with a stretcher, carried back his Adjutant. He set a magnificent example of courage and devotion to his officers.