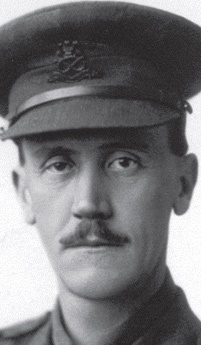 On 14 December 1916, Lieutenant General Sir Stanley Maude, who had been appointed British commander in Mesopotamia in July, launched the second phase of the campaign, attacking Turkish positions around Kut-el-Amara. Among other advances British troops reached the Hai, a river which flowed north to join the Tigris opposite Kut. On 25 January 1917 the British attacked the Hai salient, near Kut. On the west bank of the Hai, 39th Brigade met stiff resistance and after initial gains was driven back. An advance by the 9th Warwickshires led by Acting Lieutenant Colonel E E D Henderson for a time regained lost ground but Henderson was mortally wounded. Both he and Temporary Lieutenant R E Phillips, who brought him back to British lines, were awarded the VC for their gallantry. For his part in the rescue attempt Corporal Scott was awarded the DCM.

For most conspicuous bravery, leadership and personal example when in command of his battalion. Lt.-Col. Henderson brought his battalion up to our two front-line trenches, which were under intense fire, and his battalion had suffered heavy casualties when the enemy made a heavy counter-attack, and succeeded in penetrating our line in several places, the situation becoming critical. Although shot through the arm, Lt.-Col. Henderson jumped on to the parapet and advanced alone some distance in front of his battalion, cheering them on under the most intense fire over 500 yards of open ground. Again wounded, he nevertheless continued to lead his men on in the most gallant manner, finally capturing the position by a bayonet charge. He was again twice wounded, and died when he was eventually brought in.