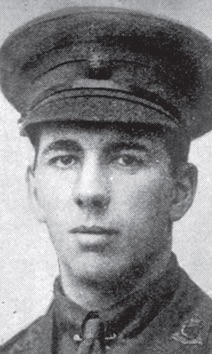 In early March 1916 the British had taken over from the French Tenth Army responsibility for the sector west of Lens, running south for twenty miles from Loos to Ransart, about five miles south-west of Arras. The action for which Second Lieutenant E F Baxter was awarded the Victoria Cross took place on 17-18 April 1916 at Ransart. For a time it was thought that Baxter might have been taken prisoner and he was reported missing, but later, based on German information passed on by the American Embassy in Berlin, he was reported killed.

For most conspicuous bravery. Prior to a raid on the hostile line he was engaged during two nights in cutting wire close to the enemy’s trenches. The enemy could be heard on the other side of the parapet. Second Lieutenant Baxter, while assisting in the wire cutting, held a bomb in his hand with the pin withdrawn ready to throw. On one occasion the bomb slipped and fell to the ground, but he instantly picked it up, unscrewed the base plug, and took out the detonator, which he smothered in the ground, thereby preventing the alarm being given, and undoubtedly saving many casualties. Later, he led the left storming party with the greatest gallantry, and was the first man into the trench, shooting the sentry with his revolver. He then assisted to bomb dugouts, and finally climbed out of the trench and assisted the last man over the parapet. After this he was not seen again, though search parties went out at once to look for him. There seems no doubt that he lost his life in his great devotion to duty.