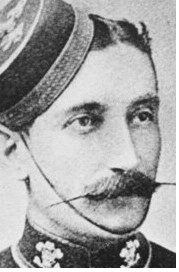 Following the relief of Kimberley and the surrender of Cronje’s army at Paardeberg, on 7 March 1900 Roberts began the advance towards Bloemfontein, capital of the Orange Free State. After a skirmish at Poplar Grove the only serious resistance the British encountered was at Driefontein on 10 March. Bloemfontein surrendered on the 13th. That same day, a small force under Brevet Major Aylmer Hunter Watson blew up a double-spanned culvert on the railway line north of Bloemfontein, trapping 25 engines and 108 coaches and trucks in the capital. On their way back through Boer lines Watson and his men ran into a party of Boers. For their part in assisting the escape from the enemy, Sergeant H W Engleheart was awarded the VC and Corporal F H Kirby the DCM (he was later awarded the VC for an action on 2 June 1900).

At dawn on the 13th March, 1900, the party that had destroyed the railway north of Bloemfontein had to charge through a Boer picquet and get over four deep spruits, in order to make their way back through the Boer lines. At the fourth spruit Sapper Webb’s horse failed to get up the bank and he was left in a very dangerous position. In face of a very heavy rifle and shell fire, and, notwithstanding the great chance of being cut off, Sergeant Engleheart returned to Sapper Webb’s assistance. It took some time to get the man and his horse out of the spruit and the position became momentarily more critical owing to the advance of the Boers. He was, however, at last successful, and retiring slowly, to cover Webb’s retreat, was able to get him safely back to the party. Shortly before this, Sergeant Engleheart had shown great gallantry in dashing into the first spruit, which could only be reached in single file and was still full of Boers hesitating whether to fly or fire. Had they been given time to rally, they must have destroyed the small party of British, as they outnumbered them by 4 to 1.