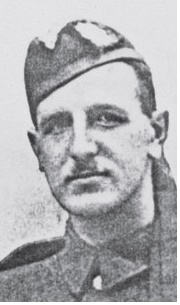 At 7.30am on 1 July 1916, General Sir Douglas Haig launched an attack by Fourth Army against the heavily fortified German line stretching along the chalk downland overlooking the Somme valley from the north. Fourth Army manned the sector running from Maricourt in the south, past Fricourt, crossing the road east from Albert towards Bapaume, then north to Thiepval and Beaumont-Hamel and on towards Gommecourt. The first day’s objective was to capture Montauban and Contalmaison in the south and further north to push the Germans back to their second line, running east of Pozières and then through Grandcourt. At the opening of the battle 10th Battalion The Yorkshire Regiment took part in the attack on the German front line at Fricourt, three miles east of Albert. After the British barrage had ended the Germans had time to man their machine-gun positions and directed a murderous fire on their attackers. Temporary Major S W Loudoun-Shand gallantly encouraged B Company, 10th Battalion, to advance before being mortally wounded. Only one officer and 27 men of B Company survived the attack uninjured. North of the Albert-Bapaume road 32nd Division mounted an attack on the Leipzig Redoubt in the Leipzig Salient, where the German front line jutted out west between Authuille and Thiepval to the north. The 17th Battalion The Highland Light Infantry managed to take the first line of trenches, which included an abandoned German bomb store, and pushed on towards the second line. The Germans began to counter-attack and Sergeant J Y Turnbull’s party was almost cut off but, by making use of abandoned German bombs, he managed to maintain their position. Turnbull was killed by a sniper later in the day. To the north of 32nd Division, the 36th (Ulster) Division attacked the Schwaben Redoubt, just north of Thiepval and close to the present site of The Ulster Tower. They advanced 400 yards to the Redoubt but suffered heavy casualties. It was in this attack that Captain E N F Bell, 9th Battalion Royal Inniskilling Fusiliers, took part. 14th Battalion The Royal Irish Rifles were in support and this was the occasion of Private W F McFadzean’s act of gallantry. On the evening of the 1st 1/7th Battalion The West Yorkshire Regiment were among several units sent up to assist against German counter-attacks. They withdrew after nightfall, but a company under Corporal G Sanders became separated from the main force and was not relieved for 36 hours. Most of the Redoubt remained in German hands until late September (see 26-28 September 1916 below) and the enemy was not finally expelled from it until 14 October 1916. Meanwhile, across the River Ancre, north-west of Thiepval, 4th and 29th Divisions attacked the German line at Beaumont-Hamel. The 11th Brigade which launched the initial assault at 7.30am on the 1st was annihilated. 2nd Battalion The Seaforth Highlanders formed part of the second wave of the attack. Drummer W P Ritchie, who had disobeyed an order to leave behind his instrument, used his bugle repeatedly to inspire the men. By the end of the day only four officers and men survived from the 2nd Battalion. Rifleman R Quigg, 12th Battalion The Royal Irish Rifles, went out into no man’s land to search for his platoon officer, Sir H McNaghten, whose body was never found, but Quigg gallantly rescued seven others. 9th Battalion The Royal Irish Fusiliers attacked south of the village and also encountered murderous fire. Temporary Lieutenant G St G S Cather was killed next day, while rescuing wounded men from no man’s land. Haig lengthened the line of attack by ordering VII Corps of Third Army, which manned the front north of Fourth Army, to stage a diversionary assault intended to divert German forces from the main battlefield further south. 46th Division advanced from Foncquevillers to attack Gommecourt. 1/5th Battalion The Sherwood Foresters suffered very heavy casualties, losing 491 out of the 734 men who took part in the attack. Captain J L Green, Royal Army Medical Corps, went to the assistance of the wounded Captain F B Robinson, 139th Brigade Machine-Gun Officer, and was killed while attempting to bring` him back to the British lines. Robinson was eventually brought in by others and reported Green’s gallantry before he died on 3 July. In terms of casualties, 1 July 1916, the opening day of the Battle of the Somme, was to be the worst day the British Army had ever experienced. Some gains were made in the south with Montauban and Mametz captured. 21st Division had established a salient north of Fricourt but further north little had been achieved despite the prodigious cost in lives. The battle was to drag on until 18 November when the onset of winter made further fighting impossible.

For most conspicuous bravery and devotion to duty, when, having with his party captured a post apparently of great importance to the enemy, he was subjected to severe counter-attacks, which were continuous throughout the whole day. Although his party was wiped out and replaced several times during the day, Serjeant Turnbull never wavered in his determination to hold the post, the loss of which would have been very serious. Almost single-handed, he maintained his position, and displayed the highest degree of valour and skill in the performance of his duties. Later in the day this very gallant soldier was killed whilst bombing a counter-attack from the parados of our trench.