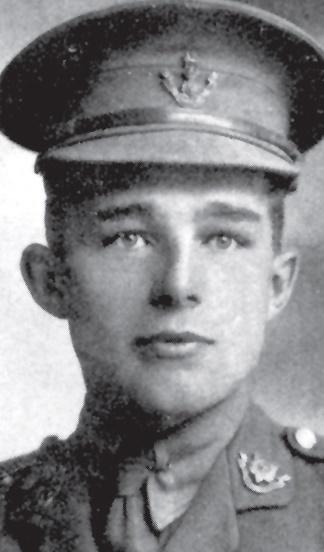 La Boisselle lies on the Bapaume Road about two miles north-east of Albert. On 1 July, the first day of the Battle of the Somme, the attack there on the German line by the 34th Division failed to make headway and the 19th Division was brought up. On 2 July the 58th Brigade established itself south of La Boisselle and the 57th Brigade was ordered to continue the assault. The brigade attacked at 3.15am on the 3rd but the capture of the village was not completed before the end of 4 July and fierce fighting continued the following day, when the 23rd Division’s objective was Horseshoe Trench, on high ground between La Boisselle and Mametz to the south-east, just beyond Fricourt. Despite heavy casualties progress was made and Horseshoe Trench was taken. It was here that T/Lieutenant T O L Wilkinson, 7th Battalion The Loyal North Lancashire Regiment, and Temporary Second Lieutenant D S Bell, 9th Battalion The Yorkshire Regiment, distinguished themselves. Corporal Colwill and Private Batey, who assisted Bell, were each awarded the DCM. In the fighting on the 3rd Temporary Lieutenant Colonel A P Carton de Wiart, commanding 8th Battalion The Gloucestershire Regiment, had taken charge of 8th Battalion The North Staffordshire Regiment, 10th Battalion The Worcestershire Regiment and 10th Battalion The Warwickshire Regiment, when their commanders became casualties. It was due to his courage and determination under heavy fire that the British managed to maintain their positions. In the course of that day Lt W Jennings, 10th Battalion The Worcestershire Regiment, was wounded in the leg. Private T G Turrall dragged him to a shell-hole and used part of an entrenching tool as a splint. He had to fight off German attacks and at one point, during a German counter-attack, feign death. Turrall remained with Jennings for three hours and finally brought him back to British lines. Jennings died a few hours later.

For most conspicuous bravery. During an attack, when a party of another unit was retiring without their machine gun, Lieutenant Wilkinson rushed forward and, with two of his men, got the gun into action, and held up the enemy till they were relieved. Later, when the advance was checked during a bombing attack, he forced his way forward and found four or five men of different units stopped by a solid block of earth, over which the enemy was throwing bombs. With great pluck and promptness he mounted a machine gun on top of the parapet and dispersed the enemy bombers. Subsequently he made two most gallant attempts to bring in a wounded man, but the second attempt he was shot through the heart just before reaching the man. Throughout the day he set a magnificent example of courage and self-sacrifice.