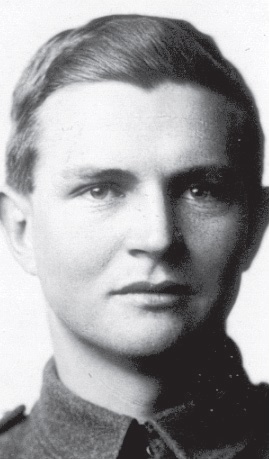 As the Battle of the Somme progressed, on 14 July 1916 the British captured most of Longueval, a village north-east of Montauban and about six miles south of Bapaume. They were however threatened by the Germans in Delville Wood which bordered Longueval to the east. On 15 July the 1st South African Infantry Brigade was sent in to clear it. After five days, out of 1,500 men there were only 142 survivors. On the 16th, Private W F Faulds, assisted by Privates George Baker and Alexander Estment, rescued Lieutenant Arthur Craig. Faulds rescued another wounded man two days later. On 20 July the South Africans were relieved by men of the 76th Brigade. 10th Battalion The Royal Welsh Fusiliers had also taken part in the attack and corporal J D Davies and Private A Hill had distinguished themselves. Ferocious fighting at Delville Wood in which ground constantly changed hands was to rage until 3 September.

For most conspicuous bravery and devotion to duty. A bombing party under Lieut. Craig attempted to rush across 40 yards of ground which lay between the British and enemy trenches. Coming under very heavy rifle and machine gun fire the officer and the majority of the party were killed or wounded. Unable to move, Lieut. Craig lay midway between the two lines of trench, the ground being quite open. In full daylight Pte. Faulds, accompanied by two other men, climbed over the parapet, ran out, and picked up the officer, and carried him back, one man being severely wounded in so doing. Two days later Private Faulds again showed most conspicuous bravery in going out alone to bring in a wounded man, and carrying him nearly half a mile to a dressing station, subsequently rejoining his platoon. The artillery fire was at the time so intense that stretcher-bearers and others considered that any attempt to bring in the wounded man meant certain death. This risk Private Faulds faced unflinchingly, and his bravery was crowned with success.