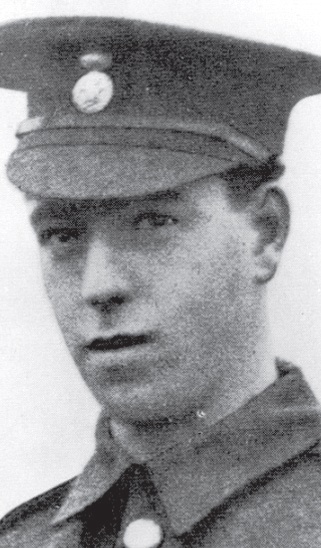 As the Battle of the Somme progressed, on 14 July 1916 the British captured most of Longueval, a village north-east of Montauban and about six miles south of Bapaume. They were however threatened by the Germans in Delville Wood which bordered Longueval to the east. On 15 July the 1st South African Infantry Brigade was sent in to clear it. After five days, out of 1,500 men there were only 142 survivors. On the 16th, Private W F Faulds, assisted by Privates George Baker and Alexander Estment, rescued Lieutenant Arthur Craig. Faulds rescued another wounded man two days later. On 20 July the South Africans were relieved by men of the 76th Brigade. 10th Battalion The Royal Welsh Fusiliers had also taken part in the attack and corporal J D Davies and Private A Hill had distinguished themselves. Ferocious fighting at Delville Wood in which ground constantly changed hands was to rage until 3 September.

For most conspicuous bravery. When his battalion had deployed under very heavy fire for an attack on the enemy in a wood, he dashed forward, when the order to charge was given, and, meeting two of the enemy suddenly, bayonetted them both. He was sent later by his platoon serjeant to get into touch with the company, and, finding himself cut off and almost surrounded by some twenty of the enemy, attacked them with bombs, killing and wounding many and scattering the remainder. He then joined a serjeant of his company and helped him to fight the way back to the lines. When he got back, hearing that his Company Officer and a scout were lying out wounded, he went out and assisted to bring in the wounded officer, two other men bringing in the scout. Finally, he himself captured and brought in as prisoners two of the enemy. His conduct throughout was magnificent.