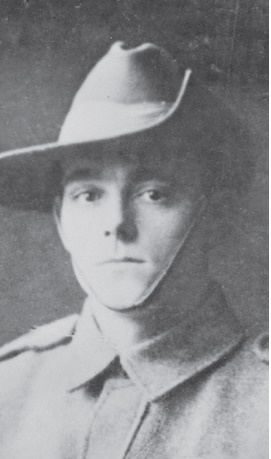 Pozières was the next village north-east of La Boisselle along the main road between Albert and Bapaume and formed part of the Germans’ second defensive line. It was captured by the British on 1 July 1916, the first day of the Battle of the Somme, but then recaptured by the Germans. On 23 July it was attacked by the 9th Battalion, 3rd Brigade, Australian Imperial Force, and mostly captured but the Germans then counter-attacked. The 10th Battalion as well as 8th Battalion, 2nd Brigade, which had been held in reserve during the initial attack, were called in to assist and by the 24th most of the village was secured, though German counter-attacks continued. However, Pozières ridge just east of the village was not captured until 4 August (for further fighting see 28-29 July 1916 below). The Australian forces suffered appalling casualties. Lt A S Blackburn, 10th Battalion, 3rd Brigade, Australian Imperial Force, took part in the attack on Pozières on 23 July. With his platoon sergeant R M Inwood (brother of Corporal R R Inwood VC), he sought to establish a junction between his Battalion and the 9th. In the course of the fighting Inwood was killed but by the eventual capture of a further 120 yards of trench, Blackburn had narrowed the gap between the two Battalions.

For most conspicuous bravery. He was one of a party which finally captured an enemy strong point. At one assault, when the enemy’s bombs were outranging ours, Private Leak jumped out of the trench, ran forward under heavy machine-gun fire at close range, and threw three bombs into the enemy’s bombing post. He then jumped into the post and bayonetted three unwounded enemy bombers. Later, when the enemy in overwhelming numbers was driving his party back, he was always the last to withdraw at each stage, and kept on throwing bombs. His courage and energy had such an effect on the enemy that, on the arrival of reinforcements, the whole trench was recaptured.