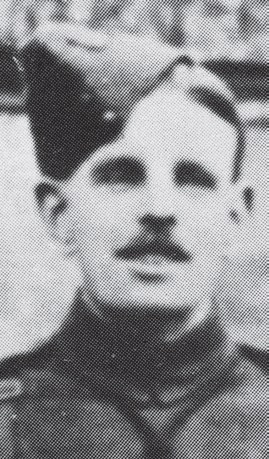 On 14 October 1916 Second Lieutenant F S Smith and Sergeant W E Rhoades, RFC rescued a wounded man from a dug-out after an explosion at Droogland Aerodrome. This lay west of Ypres and Poperinge, just across the French border near the village of Winnezeele. Smith and Rhoades were both awarded the AM but only Rhoades lived long enough for his Medal to be converted to the GC.

The KING has been graciously pleased to award the Decoration of the Albert Medal to the undermentioned Officers and Non-Commissioned Officers and a Private of His Majesty’s Forces serving in France or elsewhere in recognition of their gallantry in saving life :–
Lieutenant Frederick Stuart Smith and Serjeant William Ernest Rhoades, both of the Royal Flying Corps
At an aerodrome in France, on the 14th October, 1916, a bomb accidentally exploded in the mouth of a dug-out forming a bomb store, which contained a large number of bombs packed in wooden cases and a quantity of rockets. Two men were killed by the explosion, and another man, who was severely injured, was thrown down into the store. Dense volumes of smoke issued from the dug-out, and there was a great risk of a further explosion. Lieutenant (then Second Lieutenant) Smith, on hearing a call for help, immediately entered the dug-out, followed by Sergeant Rhoades, and succeeded in rescuing the wounded man, who would otherwise have been suffocated.