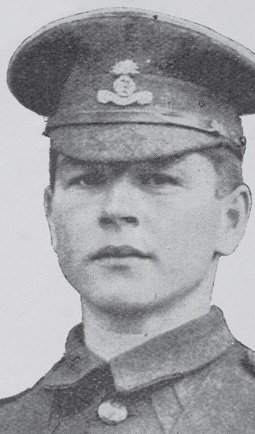 For most conspicuous bravery and devotion to duty in attack. When most of the officers had become casualties, this Non-Commissioned Officer, utterly regardless of personal danger, moved about under heavy fire and reorganised the attack, which had been temporarily checked. At the critical moment he rushed forward alone, shouting, “Come on the Dubs.” This stirring appeal met with immediate response, and the line rushed forward at his call. Serjeant Downie accounted for several of the enemy, and in addition captured a machine gun, killing the team. Though wounded early in the fight, he remained with this company, and gave valuable assistance whilst the position was being consolidated. It was owing to Serjeant Downie’s courage and initiative that this important position, which had resisted four or five previous attacks, was won.