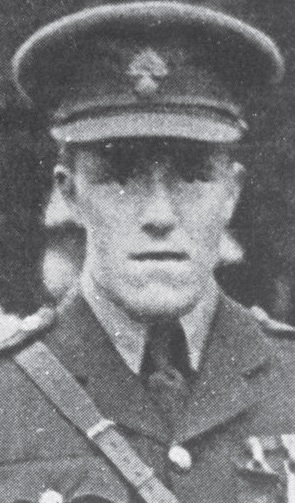 In early February 1917 the British began to press north from Courcelette, just north of the Albert-Bapaume road, towards Miraumont, west of Bapaume. On 16-17 February, 22nd and 23rd Royal Fusiliers were both involved in the fighting. The 22nd lost eighty-five dead. All of the survivors of Lance Sergeant F W Palmer’s attacking party were awarded the DCM or the MM.

For most conspicuous bravery, control and determination. During the progress of certain operations, all the Officers of his Company having been shot down, Sjt. Palmer assumed command, and, having cut his way under point blank machine gun fire, through the wire entanglements, he rushed the enemy’s trench with six of his men, dislodged the hostile machine gun which had been hampering our advance, and established a block. He then collected men detached from other regiments, and held the barricade for nearly three hours against seven determined counter-attacks, under an incessant barrage of bombs and rifle grenades from his flank and front. During his temporary absence in search of more bombs an eighth counter-attack was delivered by the enemy, who succeeded in driving in his party, and threatened the defences of the whole flank. At this critical moment, although he had been blown off his feet by a bomb and was greatly exhausted, he rallied his men, drove back the enemy and maintained his position. The very conspicuous bravery displayed by this Non-commissioned Officer cannot be overstated, and his splendid determination and devotion to duty undoubtedly averted what might have proved a serious disaster in this sector of the line.