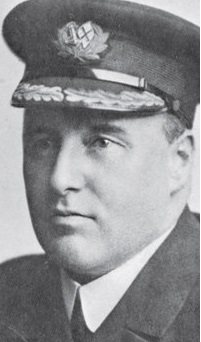 On 10 March 1917 the SS Otaki, a refrigerated meat-carrier en route back to New Zealand via New York, was attacked about 350 miles east of the Azores by the German commerce raider, Möwe, which had already sunk or captured 25 Allied ships. The Otaki was armed and under its Master, Captain A B Smith, having failed to outrun the Möwe, put up a furious resistance, to the extent that the badly damaged German ship was subsequently forced to return to Kiel. After an engagement lasting twenty minutes, Captain Smith ordered his crew, including his own stepson, to abandon ship. Only the Chief Officer and the ship’s carpenter remained with the Captain, both believing that Smith would follow them into the water. However, he preferred to go down with his ship. The survivors were picked up by the Möwe and interned for the remainder of the war. Chief Officer Roland H L McNish was awarded the DSO for his bravery. Archibald

For most conspicuous gallantry and devotion to duty when in command of the S S “Otaki,” on the 10th March, 1917 At about 2 30 p m on 10th March, 1917 the S S “Otaki,” whose armament consisted of one 4 7 in gun for defensive purposes, sighted the disguised German raider “Moewe,” which was armed with four 5 9 inch, one 4 1 inch and two 22 pdr guns, and two torpedo tubes The “Moewe” kept the “Otaki” under observation for some time and finally called upon her to stop This Lieutenant Smith refused to do, and a duel ensued at ranges of 1900 2000 yards, and lasted for about 20 minutes During this action the “Otaki” scored several hits on the “Moewe,” causing considerable damage, and starting a fire, which lasted for three days She sustained several casualties and received much damage herself, and was heavily on fire Lieutenant Smith, therefore, gave orders for the boats to be lowered to allow the crew to be rescued He remained on the ship himself and went down with her when she sank with the British colours still flying, after what was described in an enemy account as “a duel as gallant as naval history can relate”