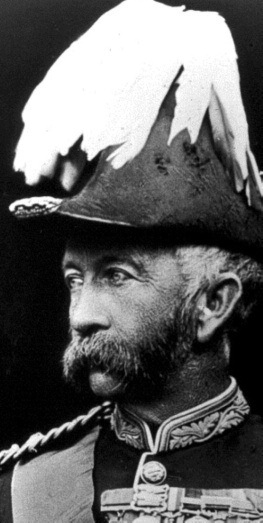 The Malwa Field Force under Major General J Michel was pursuing Tantya Tope in the country south of Gwalior. After an action at Mungrowlee on 10 October 1858, the rebel leader headed east, crossing the Betwa, south of Chandairee. To prevent him heading further east, Michel attacked the rebels at Sindwaho on 19 October. Tantya Tope spent the next six months criss-crossing Rajasthan and the surrounding territories until he was finally captured by the British in April 1859. Lieutenant H E Wood, who had distinguished himself at Sindwaho, was in May 1859 appointed Brigade Major of Beatson’s Horse, based at Berasia, about thirty miles north of Bhopal. On 26 December 1859 news came from Sindhara, 18 miles north-west of Berasia that bandits were in the area. Wood arrived at Sindhara on 28 December and set off in pursuit of the outlaws who had carried off a loyal landowner and were intending to hang him. After making their way through the jungle for an hour, Wood and his force surprised the bandits and rescued their prisoner.

For having, on the 19th of October, 1858, during Action at Sindwaho, when in command of a Troop of the 3rd Light Cavalry, attacked with much gallantry, almost single-handed, a body of Rebels who had made a stand, whom he routed. Also, for having subsequently, near Sindhora, gallantly advanced with a Duffadar and Sowar of Beatson’s Horse, and rescued from a band of robbers, a Potail, Chemmum Singh, whom they had captured and carried off to the Jungles, where they intended to hang him.