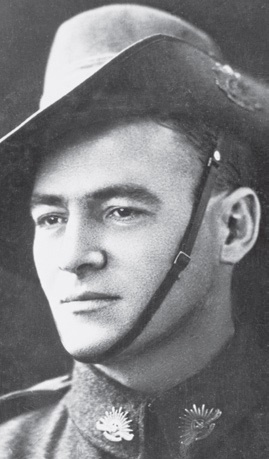 Following the capture of Lagnicourt on 26 March 1917, on 2 April the 50th and 51st Battalions Australian Imperial Force, advanced a mile or so north-west to Noreuil, another German position protecting the Hindenburg Line. The village was fiercely defended.

For most conspicuous bravery and initiative when, with five comrades, he attacked a barricade behind which were about 45 of the enemy and a machine gun. One of his party shot the gunner, and Pte. Jensen, single-handed, rushed the post and threw in a bomb. He had still a bomb in one hand, but taking another from his pocket with the other hand he drew the pin with his teeth, and by threatening the enemy with two bombs and by telling them that they were surrounded, he induced them to surrender. Pte. Jensen then sent one of his prisoners to order a neighbouring enemy party to surrender, which they did. This latter party were then fired on in ignorance of their surrender by another party of our troops; whereupon Pte. Jensen, utterly regardless of personal danger, stood on the barricade, waved his helmet, caused the firing to cease, and sent his prisoners back to our lines. Pte. Jensen’s conduct throughout was marked by extraordinary bravery and determination.