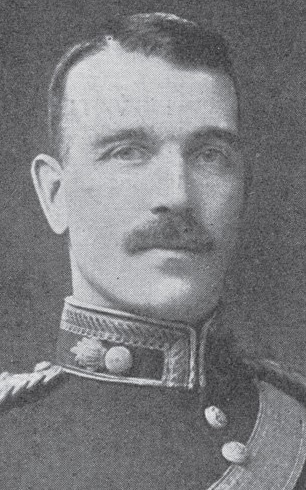 On 2 April 1917 the British attacked various German positions just west of St Quentin. On the 3rd they advanced against the village of Francilly-Selency. In the course of the fighting the enemy was forced to abandon six field guns. Despite German attempts to destroy these by shelling and against all the odds, Major F W Lumsden, RMA, succeeded in capturing them.

For most conspicuous bravery, determination and devotion to duty. Six enemy field guns having been captured, it was necessary to leave them in dug-in positions, 300 yards in advance of the position held by our troops. The enemy kept the captured guns under heavy fire. Maj. Lumsden undertook the duty of bringing the guns into our lines. In order to effect this, he personally led four artillery teams and a party of infantry through the hostile barrage. As one of these teams sustained casualties, he left the remaining teams in a covered position, and, through very heavy rifle, machine gun and shrapnel fire, led the infantry to the guns. By force of example and inspiring energy he succeeded in sending back two teams with guns, going through the barrage with the teams for the third gun. He then returned to the guns to await further teams, and these he succeeded in attaching to two of the three remaining guns, despite rifle fire, which had become intense at short range, and removed the guns to safety. By this time the enemy, in considerable strength, had driven through the infantry covering points, and blown up the breach of the remaining gun. Maj. Lumsden then returned, drove off the enemy, attached the gun to a team and got it away.